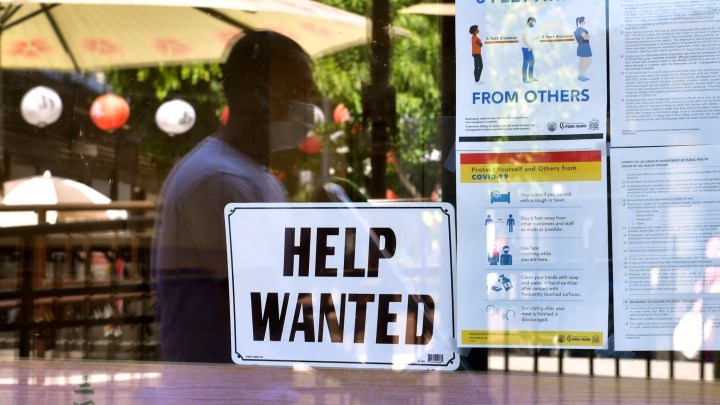 COPY
A "Help Wanted" sign is posted beside coronavirus safety guidelines at a restaurant in Los Angeles on May 28. Frederic J. Brown/AFP via Getty Images
COVID-19

A "Help Wanted" sign is posted beside coronavirus safety guidelines at a restaurant in Los Angeles on May 28. Frederic J. Brown/AFP via Getty Images
Listen Now

First-time unemployment claims dropped to 406,000 last week — the lowest level since the pandemic began. That sounds great compared to any point in the last 15 months, but it’s still far higher than the numbers before coronavirus struck. And yet, a lot of employers say they’re still having a hard time hiring.

Those complaints are especially prominent in the hospitality industry, and business owners are going to great lengths to woo potential workers.

Hiring had become such a time-suck for Wes Hansen that he hired someone to take over hiring. And it’s kind of working. Hansen owns a barbeque joint in Phoenix called Pork on a Fork. He’s seeing an increase in applications, but “out of the 250, I think we’ve interviewed 10,” he said.

People schedule interviews and don’t show up, Hansen said, even when it’s just a Zoom call. It’s all starting to make him feel a little crazy.

“Are these even real people?” he said.

The search for workers is getting so difficult that Jeffrey Bank — who owns Carmine’s, an Italian restaurant chain with locations in Atlantic City, Washington, D.C. and other tourist spots — is doing something he hasn’t done in years: Pounding the pavement.

“I talk to doormen at buildings in Manhattan. I talk to people at the gas station,” Bank said.

In fact, every business owner we talked to says they’re offering bonuses. David Farahi, COO of Monarch Casino and Resort in Reno, Nevada, has also raised wages. An entry-level housekeeper who once made $15 an hour now makes $17. But, “we have not found any kind of silver bullet,” Farahi said.

“What we’ve had to do is find technological solutions to reduce the need for people,” he said.

That means when customers place a sports bet or cash out, they’ll interact with a kiosk instead of a cashier.

Jennifer Tierney of Tierney Recruiting Services says right now, in addition to interviewees asking about how much money the job pays and what the benefits are, there’s a third question that’s coming up more often.

“When I’m interviewing somebody, they’re asking me, ‘What does work-life balance look like?’ They’re tired of not having a life, I guess,” she said.

“There is a lot of a- -holes out there that are running these restaurant companies. And they just come in and scream and yell at people, and people just are sick of it,” Tierney said.

She thinks that means the hospitality industry is in for a change.