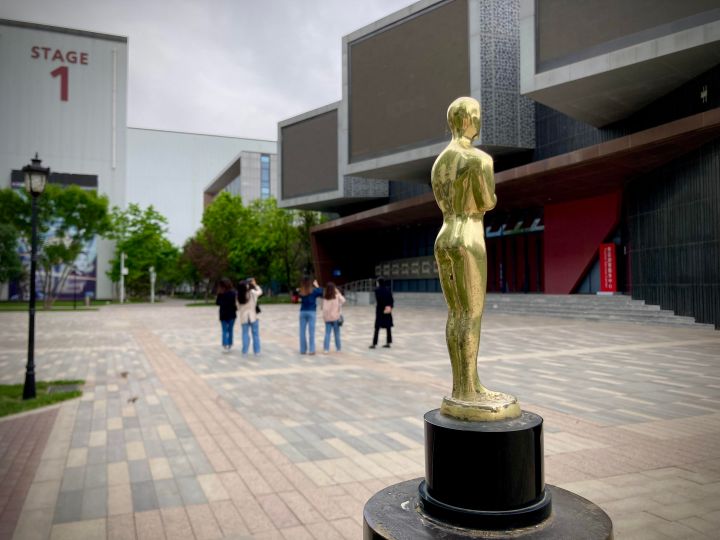 Dachang Movie Town, just 30 miles from the heart of Beijing in northern China’s Hebei province, houses movie stages where reality shows and feature films are shot. It is only open to the public by way of a guided tour.

On a recent visit last month, tourists were taken to Stage 8, where in 2017 actor Jackie Chan filmed the Chinese movie the “Knight of Shadows: Between Yin and Yang.”

A film school on the site might have been another good tour stop but it has been closed since the COVID-19 pandemic struck China last year.

The company that ran the film school is a visual effects and animation firm called Base Media. It has worked on the likes of the live action “Star Wars” series “The Mandalorian;” “Captain America: The Winter Soldier;” and big Chinese films like “Wandering Earth.”

Not only did Base Media have to shutter its school, it also had to lay off scores of workers in its Malaysia office when Hollywood productions came to a halt last year.

“[They were employees] recruited to work on American content,” Base Media founder and CEO Chris Bremble said from the company’s headquarters in Beijing. “We had probably 115, 120 staff there. I think we got it down to 30.”

China re-opened its movie theaters last year after successfully getting the COVID-19 virus outbreak under control. It was the first major economy to do so. The effects of pandemic, however, continue to challenge the movie post-production sector – companies such as Base Media.

As Bremble’s U.S.-facing side of the business dried up during the pandemic, he said his company has turned its focus more towards the China market.

However, his staff keeps getting poached by gaming companies, whose business exploded during the pandemic when so many people were stuck at home.

These video games companies are trying to make their games look more like movies with real-time lighting and massive environments.

“In order to sort of secure that future [the gaming companies] have been actually going to the visual effects industry and getting those artists that are used to doing that level of quality, [who are] traditionally not a part of the gaming business and then pulling them in,” Bremble said.

He estimates he lost 10% of his workers to Chinese gaming companies over the last nine months. That’s bad but not as bad as for some other visual effects companies.

“There are companies here in Beijing that have lost entire departments in one day. [In] one day, the whole department gets up and leaves,” Bremble said.

Still, Base Media has managed to stay afloat during this pandemic because of its animation business, which has made up for some of the work lost in its visual effects department when movie companies had to cut back on filming.

Earlier this year, Base Media partnered with Sony Pictures and Chinese tech giant Tencent to release its first full-length animated film called “Wish Dragon.” It is an Aladdin-like tale except the story is set in modern Shanghai and instead of a genie trapped in a lamp granting wishes, it is a dragon trapped in a teapot from the Qing dynasty.

The film was released in theaters in China Jan. 15.

“Unfortunately, COVID-19 cases in China peaked on January 14. Most of the suburban theaters, Beijing, Shanghai were shut,” Bremble said.

On its first week in theaters, “Wish Dragon” pulled in 36.1 million yuan ($5.6 million), according to the China film database firm Maoyan. So far, the movie has pulled in more than $26 million from the Chinese box office.

“We did well, but we didn’t do as well as we hoped,” Bremble said.

The film is set to release worldwide on Netflix next month.

Meanwhile, Hollywood is starting to book stages to begin shooting movies again as vaccination rates and lockdown rules relax in the U.S.

Recovery will be slow, even in China, according to Bremble.

Filming on the Chinese mainland has been strict even though the country has largely contained the pandemic.

“One of our clients filmed up in Inner Mongolia in January and they had a three-week quarantine for the entire crew [at the same hotel] before they could go to the next hotel, which was not quarantine and they could all then go to set,” Bremble said.

He estimates it could take another four to five months for China productions to get back to normal.