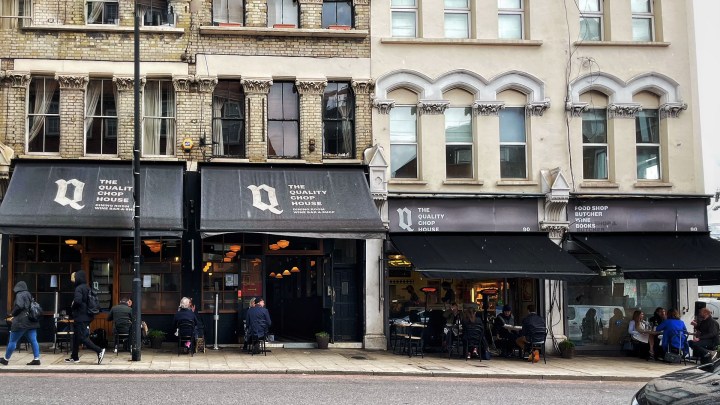 British restaurants like The Quality Chop House are on a hiring spree to try to meet elevated consumer demand. Victoria Craig/Marketplace
Listen Now

This dynamic could result in heightened inflation.

The last year has been a slog for the British hospitality industry. It lost out on more than $110 billion in revenue in 2020, according to industry group UKHospitality.

But things are turning around fast, according to James Fryer, director of the Woodhead Restaurant Group, which owns restaurants including The Quality Chop House and Clipstone. “We are very, very booked. At the moment it’s just full to the end of the month,” Fryer said.

With the economy now almost fully reopened after a painful three-month lockdown, Fryer is on a hiring spree, adding several chefs and more waitstaff at all of the company’s restaurants.

Getting people to agree to come on board, though, requires a little more incentive these days.

“For us, it was trying to communicate that what we may have, above and beyond another job opportunity, is the opportunity to grow and create a career out of this,” Fryer said.

At the moment, that doesn’t include higher wages. But pressure to offer a bigger paycheck might be mounting: Research by KPMG found starting salaries and temporary worker wages rose sharply starting in March.

Could wage growth plus an explosion in demand from lockdown-fatigued customers mean inflation in the U.K. will rise past the central bank’s 2% target?

“We’re not forecasting a big overshoot in inflation, but, certainly, it’s a question we’re hearing more and more,” said HSBC economist Liz Martin. “And I can see why: If we go back to textbooks, inflation is about supply and demand. And the pandemic hit the supply side because we essentially produced fewer goods and services, and demand is pretty strong because we’ve got this recovery and we’ve got all this saved wealth.”

U.K. households currently have roughly $300 billion in pandemic-time savings. According to the Bank of England, which arrived at that figure, about 10% of it will be spent in the near term.

That’s something many in the hospitality sector are banking on, including Fryer. “People are our bread and butter, and we’ve missed everybody,” he said.

If all that extra spending — coupled with rising wholesale and commodity prices — pushes inflation higher, it likely won’t be for a sustained period, Martin said.

So it might not be a summer inflation boom that’s on the horizon, just a return to the kind of normalcy the British public has been craving.