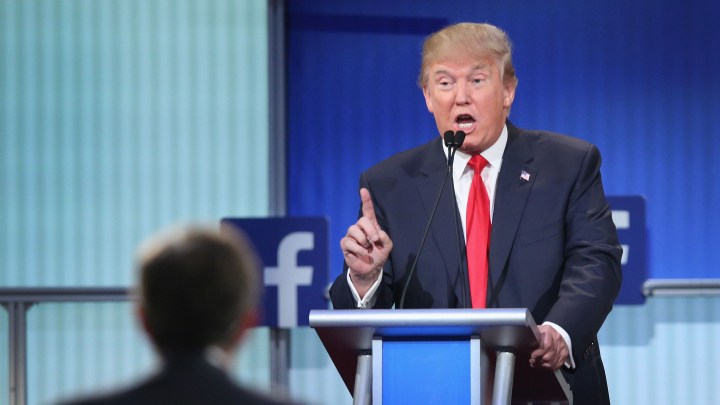 COPY
The social network’s quasi-independent Oversight Board voted to uphold the former president's ban from the platform after his account was suspended four months ago for inciting violence that led to the deadly Jan. 6 Capitol riot. Scott Olson/Getty Images

The social network’s quasi-independent Oversight Board voted to uphold the former president's ban from the platform after his account was suspended four months ago for inciting violence that led to the deadly Jan. 6 Capitol riot. Scott Olson/Getty Images
Listen Now

The audio attached to this post features an interview from the “Marketplace Morning Report” with Marketplace reporter Nova Safo.

The social network’s quasi-independent Oversight Board voted to uphold his ban from the platform after his account was suspended four months ago for inciting violence that led to the deadly Jan. 6 Capitol riot.

While upholding the suspension, the board faulted Facebook in a statement for the way it made the decision.

The board said the ongoing risk of serious violence justified Facebook’s suspension at the time, but said it “was not appropriate for Facebook to impose an ‘indefinite’ suspension.”

The board said Facebook was seeking to avoid its responsibilities by applying “a vague, standardless penalty” and then referring the case to the board to resolve.

“We love you. You’re very special,” he said in the first post, and “great patriots” and “remember this day forever” in the second. Those violated Facebook’s rules against praising or supporting people engaged in violence, the board said.

The board says Facebook has six months to reexamine the “arbitrary penalty” it imposed on Jan. 7 and decide on another penalty that reflects the “gravity of the violation and the prospect of future harm.”

The board says the new penalty must be “clear, necessary and proportionate” and consistent with Facebook’s rules for severe violations.

The board says if Facebook decides to restore Trump’s accounts, the company must be able to promptly address further violations.

A Trump spokesman did not immediately respond to a request for comment.

The board, which has 20 members and will eventually grow to 40, did not reveal how it voted. It said a minority of members emphasized that Facebook should require users who seek reinstatement after being suspended to “recognize their wrongdoing and commit to observing the rules in the future.”