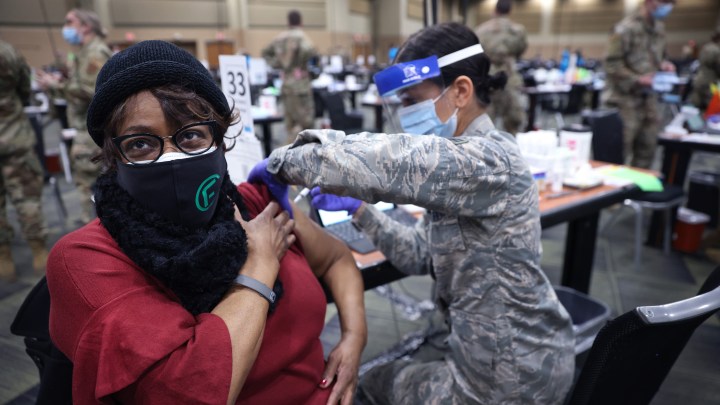 COVID-19 is not going anywhere anytime soon, according to expert witnesses who testified at a hearing held by the Joint Economic Committee Wednesday on the state of COVID-19 vaccine distribution and its effect on economic recovery from the pandemic.

Dr. Céline Gounder, a clinical assistant professor of medicine and infectious diseases at NYU School of Medicine & Bellevue Hospital, testified that COVID-19 is not a virus we can eradicate because it infects other species. There will also be people who choose not to get the vaccine, she said, or might not mount an immune response, so “we are going to see ongoing transmission.”

“That means we can’t only rely on vaccination,” Gounder said. Vaccination is necessary, but not sufficient to end the pandemic. According to Gounder, the four phases of recovering from the pandemic are ending the emergency, relaxing mitigation measures, getting to herd immunity and having long-term control.

“I think of the pandemic a bit like a speeding car. Lifting mitigation measures too soon is like taking your foot off the brake before putting the car into park. With the emergence of more infectious variants, the virus is hitting the gas at the same time,” Gounder said. “Vaccination is like a parking brake: It works well once a car is in park, but not nearly as well when you’re racing down the highway.”

Gounder expects we’ll face a prolonged interim period where we can safely lift mitigation measures but where we haven’t yet reached herd immunity. “This means that even once restrictions are lifted, we’re unlikely to get back to business as usual right away,” she said.

Therefore, testing remains a crucial factor in getting the pandemic under control, she said. Paul Romer, a Nobel Prize winning economist and professor at NYU, also made the argument for more testing, citing the rapid outbreak and surge of COVID-19 in Michigan.

“I’d be carpet bombing Michigan right now with these at-home tests that people could take,” he said. “Let people take these tests, find out if they’re infected and isolate themselves right away.”

Better therapeutics are also needed, especially with the rise of variants of the virus, Gounder said.

“We have a number of old drugs that we’re trying to repurpose and study for their use in COVID,” she said. “But we really don’t have a slam dunk here.”

There are also COVID survivors who have long-term health effects, Gounder said. “How do you even accurately assess who was a COVID survivor, and then be prepared to manage all of the health and disability rehabilitation needs that those people are going to have?”

Gounder also said there will be a drop in demand for the vaccine in the U.S. in the coming months, as supply increases but vaccine hesitancy remains. Around 20% of Americans “say they will only get vaccinated if required or will definitely not get vaccinated,” she said.

When it comes to communities of color and younger Americans, Gounder said it is more about access problems, like having trouble navigating reservation systems or not being able to take time off work.

“Then you also have other groups which include more rural Americans [and] more conservative Americans who just don’t like to be told by the government what to do; they don’t trust the health system or public health officials or the government,” Gounder said. For example, 45% of white Evangelical U.S. adults say they will not get the vaccine, according to the Pew Research Center.

Romer said that while vaccine distribution has been successful so far, it’s important to remember how severe the economic damage from COVID-19 has been. A successful economic recovery would see everyone who was working in 2019 employed again. But Romer said the unemployment rate is the wrong metric to measure our recovery by. We should be looking at the employment rate, he said, and aim for 1999 levels at that.

“We need a goal for recovery which is not just to get back to the kind of low unemployment rates we saw in 2019,” he said. “We want to get back to the very hot labor market conditions of 1999, where more people could work and where wages for the lowest-skilled members of the workforce were rising because of the demand for these workers.”

Romer said once it’s agreed that we should be shooting for 1999 labor market conditions and using employment rates as a measurement, we should try different strategies to get us there.

“Aggressive stimulus will be part of this, an infrastructure bill could be part of this, but there could be other things we could do,” he said. “We could look at things like targeted subsidies for employment or for new jobs or for hiring.”

Even though the latest jobs report was positive, with unemployment dropping to 6%, recovery is still uneven. The unemployment rate for Black Americans is still at 9.6%, and women’s labor force participation rates hit a 33-year low during the pandemic.