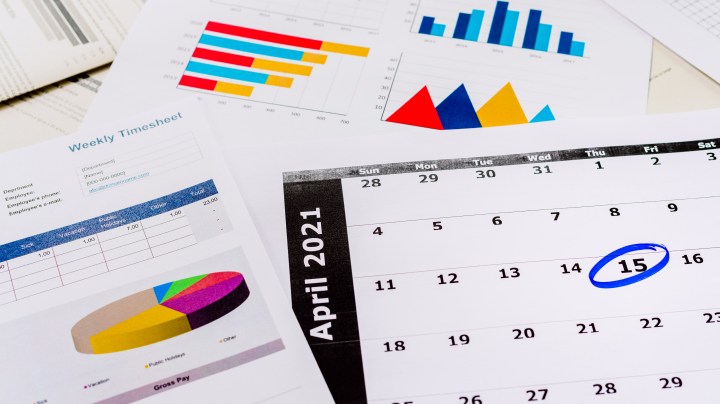 COPY
Although the deadline for individual taxpayers was deferred, many businesses have to pay their quarterly estimate by April 15, and this tax season has been unpredictable. Joaquin Corbalan/Getty Images

Although the deadline for individual taxpayers was deferred, many businesses have to pay their quarterly estimate by April 15, and this tax season has been unpredictable. Joaquin Corbalan/Getty Images
Listen Now

We know that the Internal Revenue Service has pushed back the individual 2020 tax filing deadline from April 15 to May 17 this year. And on Monday, the IRS gave filers more time to contribute to their health and retirement accounts too. But there is still one deadline that’s staying put: Many businesses must pay their first-quarter estimated tax by April 15.

Estimated taxes are due quarterly on income that isn’t subject to withholding. They’re paid by a lot of smaller businesses and self-employed people like Jackie Laundon, who runs a public health consultancy in Denver.

This quarter, she said, “I’m putting that off as long as possible, just to be able to save up what I’m estimating I will need.”

Last year, Laundon said, she had a surprisingly good fourth quarter. But now that means she owes more in taxes than she expected. So she is setting aside cash that she would have otherwise spent on a website or marketing. “It does get harder to justify that, rather than just saving it and using it to pay for taxes or make sure I have a good buffer.”

Estimated taxes are usually predictable, according to Nicole Davis, owner of Butler-Davis Tax & Accounting in Atlanta. But this year, she said, many businesses are not sure what to expect.

Davis added that many, like her hospitality clients, are still struggling, and “they just don’t have the cash to make the payments because they’re using all their money to support the business.”

However, some businesses that have managed to hang on through the pandemic are finally at a point that they can afford to set aside money for taxes.

Randy George, co-owner of Red Hen Baking Co. in Vermont, said he feels lucky to be in that situation. “Most of us who are fortunate to be doing some kind of business, if we’re not shuttered completely, are OK from a cash-flow perspective because we got the second round of the PPP,” or federal Paycheck Protection Program.

George said he’s using his 2019 budget to figure out how much he’ll owe in estimated taxes this year because his 2020 income just isn’t a helpful guide.