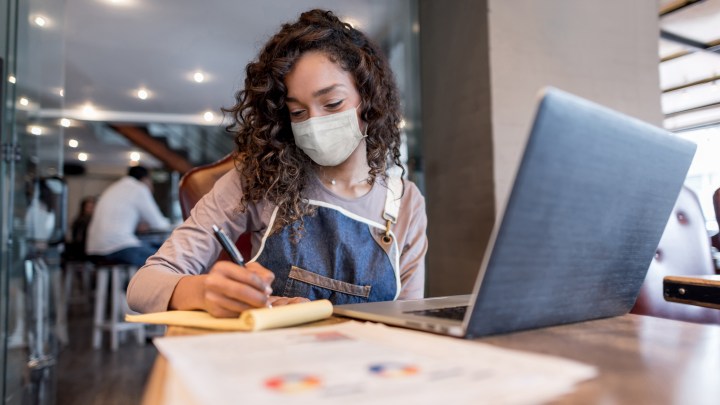 Over the last two weeks, the Small Business Administration has been limiting Paycheck Protection Program loan applications to businesses with fewer than 20 employees. The idea was to help the smallest businesses apply before the program expires at the end of the month. How has the process has been going?

It’s been a busy two weeks for Lorilyn Wilson. She runs an accounting firm in Portland, Oregon, called DueNorth PDX that mostly works with self-employed people.

Wilson said during the first round of PPP last year, many of her clients didn’t even think they were eligible. So now, they’re applying for the first time.

“You know, it’s been having that conversation, like, ‘No, you can actually take advantage of this. Let’s get you signed up for it,’” Wilson said.

Wilson said one of her clients was in the process of applying when the rules changed. “And that changed his amount from $3,000 up to $15,000. So that’s a pretty significant difference,” she said.

Some self-employed borrowers say that compared to the first time around, applying during this round has been smoother.

Mauricio Richardson, a self-employed photographer in South Carolina, applied for a second PPP loan about three weeks ago. “I want to say it was approved in about a week,” he said.

But his banker, Dominik Mjartan of South Carolina’s Optus Bank, said between the rule change and the number of new applicants, “we’re actually slowing down our process, which is another problem that we’re facing.”

That problem being the program deadline.

“My concern now is that we’re going to run out of time and not be able to get to their application until after March 31,” Mjartan said.

He said Optus Bank has been holding on to applications from bigger companies and will submit them once the window for smaller firms closes.

But new customers are still contacting the bank asking if they can apply.

“If we had more time, we could get to them. But the backlog is so huge that there’s no way we can get through it in the next two weeks,” Mjartan said.

Last week, he added, the bank actually had to shut down its application portal.