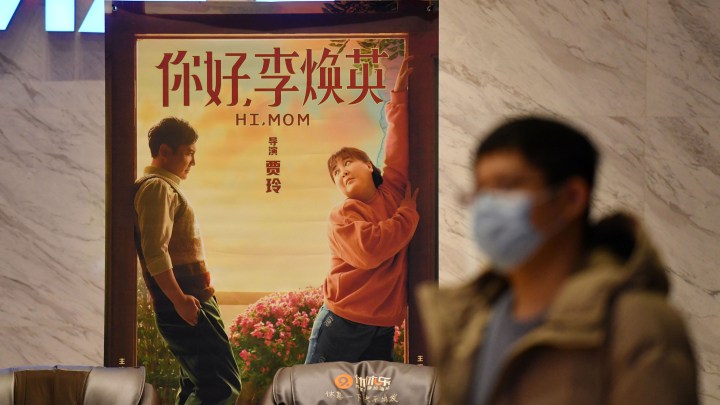 COPY
"Hi Mom," a sentimental comedy, has rapidly become one of the most popular films of all time in China. Greg Baker/AFP via Getty Images

"Hi Mom," a sentimental comedy, has rapidly become one of the most popular films of all time in China. Greg Baker/AFP via Getty Images
Listen Now

The new “Tom & Jerry” movie raked in over $12 million this weekend in China, according to Chinese movie ticketing platform Maoyan. That puts it in fifth place in the world’s largest movie market, trailing behind four domestic Chinese films.

In the lead is a movie called “Hi, Mom,” which has already grossed nearly $750 million. It’s been called the Chinese version of “Back to the Future.”

The comedy begins with the director listing all of the ways she’s failed her mother, namely not getting good grades. Then the director, who also stars in the film, travels back in time to 1981, before she’s born, with the goal of helping her mother find a better life than the one she’s had.

Movie theaters are mostly back to normal in China since the pandemic, except no food or drinks are sold or allowed. Face masks and green health codes are required.

The top four films this week are all domestic Chinese films. Years ago, at least one of those would be from Hollywood, even though U.S. films face a number of restrictions in the Chinese market.

But these days, Hollywood’s success in China is no longer a given, said movie executive Chris Fenton, author of the book “Feeding the Dragon,” a book that looks at Hollywood’s shaky foothold in China.

“Chinese movies can compete almost hand in hand with Hollywood. Now, if you look at these large-scale pictures, they’re very well crafted,” said Fenton, who works between the U.S. and China.

And the storylines connect with Chinese audiences better. Take “Hi, Mom” for example: Although it’s a comedy, its focus on the sacrifices mothers make left many moviegoers in tears.

It sparked an online discussion: What would you tell your mother if you could go back in time? Many people said they’d tell their mothers not to marry their fathers or have children.