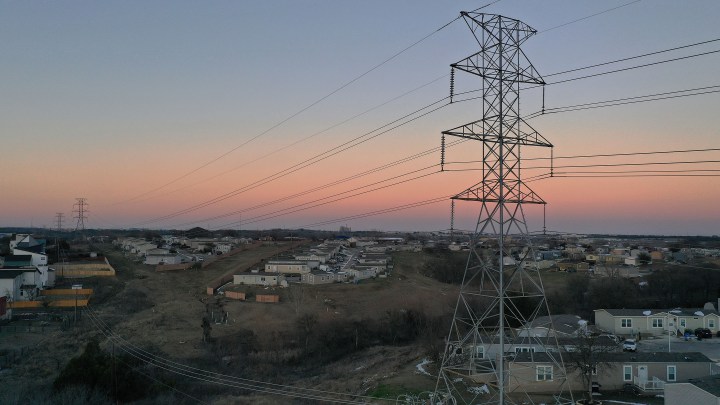 For many, the power grid failure in Texas last week underscored the need to ensure the United States’ energy infrastructure can withstand increasingly extreme weather conditions. To climate scientists, it also emphasized the urgency of reducing our carbon emissions in order to avert further climate change.

A recent report by Princeton researchers found that in order to achieve net-zero greenhouse gas emissions by 2050, the country should drastically ramp up the adoption of renewable energy with the aim to rely on renewables for 50% of our needs by 2030. In 2019, wind and solar accounted for 9% of our energy.

But Charlotte Howard, The Economist’s energy and commodities editor and New York bureau chief, says that ramping up production for renewable energy is only half the battle — the other feat is making sure that energy can reach the people who need it.

“So imagine solar panels in the desert, big wind farms in the middle of the country on the Great Plains — you need to get that power to population centers,” said Howard, who wrote about the massive undertaking for The Economist.

“And that means building a lot of transmission, which historically has been really hard to do for any number of reasons. Because you have people who don’t want power lines going over their lawns. You have people who fight over who bears the costs of big power lines that traverse their state on the way to some distant city.”

It’ll be costly, economically and politically, as the Biden administration eyes legislation that would support the country’s transition to a lower-emissions future.

Howard spoke with “Marketplace Morning Report” host David Brancaccio about what policymakers might prioritize in the quest to decarbonize America’s energy supply — and the political challenges they’ll likely confront. The following is an edited transcript of the conversation.

Charlotte Howard: Princeton did some really interesting work on this that was published in December imagining how to get to net-zero [carbon emissions] by 2050. And just in the 2030s, you could have an additional $530 billion spent just on electricity networks, with $350 billion of that on transmission. So this is not pocket change.

Brancaccio: The whole thing’s not pocket change, right? You cite entrepreneur Bill Gates, from his recent book about how we get to net-zero emissions. He’s talking about big numbers for government investments in energy innovation.

Howard: That’s right. So there are a lot of different activities that are going to be much harder to decarbonize than the generation of electricity. So you think about aviation — an airplane can’t run on a battery. You think about cement, shipping. There are lots of different things for which you need new types of technologies. And Gates talks about $35 billion a year in federal support for energy innovation.

And that is a lot of money, but it also is about how much the federal government spends on medical research now. And so if you think about some of the risks to not investing in research, not deploying America’s vast human capital towards trying to deal with this enormous problem for the world, and for America in particular, the number becomes a bit more reasonable.

Brancaccio: And you’ve been talking to the Biden administration. Clearly they want to do a lot of this, but what’s going to be the political strategy?

Howard: They clearly want to convince skeptics in the Senate that this is something that’s not just going to be good in the long term, through mitigating climate change, but also good for constituents in the short term in the form of new jobs.

So Joe Biden expects to have a big infrastructure bill later this year that includes a lot of what he wants to do on climate change domestically: support for clean power, wind and solar; support for EVs, for electric cars, as well as trying to build more electric charging stations; transmission; infrastructure that’s more resilient to some extreme weather. There’s a lot that the Biden administration is going to try to pursue through that bill, and the question is whether he can get enough votes in his own party and then maybe peel off a few Republicans to squeak a bill through.

Brancaccio: I mean, it’s interesting about fossil fuel and coal jobs. These are crucial to some people’s livelihoods and families. But the numbers really aren’t all that large in America.

Howard: It depends on which state you’re in, and that’s part of the challenge with American politics. I work for a global publication. In Britain, a minority party can’t block the policy priorities of the majority party. In America, you can. [In Britain] you don’t have disproportionate power going to small states as you do in the American Senate. The two people who lead the [Senate] Energy Committee are John Barrasso, a Republican of Wyoming, and Joe Manchin, a Democrat of West Virginia — those are states that both produce coal and have a combined population smaller than that of Brooklyn. And so there are structural political challenges in the United States to climate legislation that you don’t see in Europe, you don’t see in a centralized planning economy like China. And that’s part of why America has been slow to move to date.

What happened in Texas

Brancaccio: This Texas power disaster — “Oh well, got really cold, what can you do?” Or do you see policy, to some extent, to blame here?

Howard: In some ways the Texas disaster is surprising, and then in other ways it’s really not. So this is, of course, extreme weather. But Texas has a pretty unusual electricity market in its design. It is a state that, unlike any other state in the country, is not connected to the power grids beyond its borders. In most states, if you have a shortfall within your own state, you import some electric power from a neighbor. Texas can’t do that.

Texas also doesn’t have a system for paying electricity generators to have extra power sitting around. So most states have something called a capacity market, which gives an incentive to have that extra power on the grid. Texas’ system is hugely competitive, and people don’t keep that extra power lying around to a sufficient extent. And that’s why, when there were some outages, it really affected the whole state in a devastating way.

Brancaccio: Why are they cut off from the rest of civilization, Texas? They always thought they would always have extra power internally?

Howard: You know, if you want to talk about the politics of Texas independence, I think that’s for another show. But I do think that Texas has been very proud, historically, of what had been very, very low electricity prices for consumers because of that really competitive market.

Brancaccio: Charlotte, some opponents of green energy want to blame Texas windmills for causing the lights and heat to go out there. And indeed, some wind generators did fail. But you’re not thinking that’s the big problem here?

Howard: Well, if you just look at the numbers for the capacity that went offline, wind just objectively wasn’t the main cause. You had natural gas plants that failed. You had a nuclear plant that failed. There were failures just across the Texas energy system.

Brancaccio: So as the U.S. considers massive infrastructure upgrades to support a more renewable energy system going into the future, perhaps Texas could benefit from this.

Howard: You know, Texas isn’t the only state that’s had blackouts. Of course, California has had extreme weather in the form of these regular fires. We talked about them as unprecedented, but they become more common with each passing year.

And Texas and California are two very different electricity markets, but they do share some common problems. It would help in both states to have extra power generation backup. It would help to have energy storage, batteries and other means to help store electricity and have it available to meet demand when it spikes. And then you also really need more resilient infrastructure. In California, that might be buried power lines that aren’t causing fires. That’s been a huge problem there. It might mean more long-distance transmission in Texas. But I think in both cases you see both the impact of extreme weather on the grids and how devastating it can be when a grid isn’t prepared, and how urgently there is this need for additional investment.