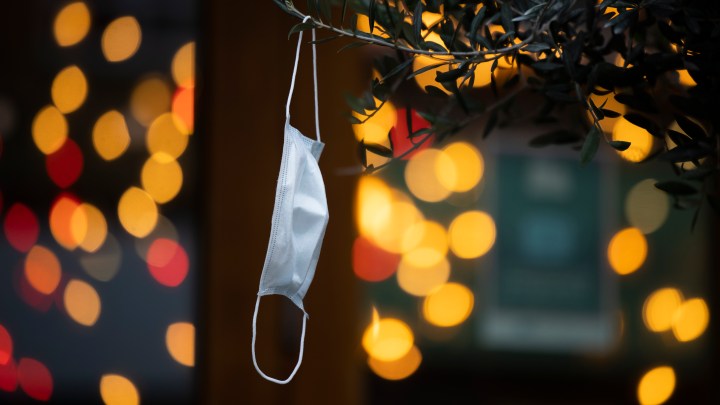 COPY
Communities in the East End have come together with a solidarity comparable to the Blitz spirit of World War II. Dan Kitwood/Getty Images
COVID-19

Communities in the East End have come together with a solidarity comparable to the Blitz spirit of World War II. Dan Kitwood/Getty Images
Listen Now

The East End has been a hardscrabble corner of the British capital for centuries, with pockets of deep poverty, overcrowding and many social problems. Near the London docks, it’s attracted waves of immigration from around the world that have turned it into one of the most densely populated areas in the U.K.

The pandemic has not passed it by. Far from it.

“At the beginning of January we had one of the highest infection rates in the country,” said Jason Strelitz, director of public health for the East End borough of Newham. “We had about 5,000 new cases in a week. Extremely, extremely high.”

Things have improved a great deal since then. He said that largely as a result of the lockdown, the current infection rate in Newham has fallen to around 800 new cases a week. But Strelitz still considers this “very high,” and it is clear that his area is still reeling from the effects of January’s onslaught.

T. Cribb & Sons, a local funeral home that has been burying East Enders since the 1880s, has never been busier.

“Our workload has doubled since before the pandemic,” said John Harris, boss of the family-run firm. “We’re working seven days a week. Some of my staff are putting in 15 or 16 hours a day. Everyone’s under extreme pressure. My dad, who is 92, says it’s worse now than in the Blitz in the Second World War, when this area was one of the most heavily bombed in the country. The mortality rate we’re dealing with now is higher.”

But why has the East End been hit so hard by COVID-19? Why has this part of London acquired the grim title of “COVID Triangle”?

Economic deprivation seems to be one of the main reasons. In the densely populated, low-income neighborhood of Newham, for example, there has been little opportunity for self-isolation.

“We have a lot of people out working in the community,” Strelitz pointed out. “Either in front-line health and social care roles, in retail jobs, in transport and security, the kind of jobs you just can’t do from home,” he said, adding that low car ownership in the borough meant that more people had to use public transport, exposing them to higher risk of infection.

Cultural factors could also play a part. Multigenerational households abound in ethnically diverse Newham and not only for economic reasons: It’s a sign of close family ties.

But Zoe Malik, the daughter of Pakistani parents who was born and brought up in Newham, said this aspect of South Asian family life has proved challenging in the time of COVID-19.

“A lot of people live with their parents and their grandparents, their siblings, their sisters-in-law perhaps, their nephews, their nieces. Because of that, COVID can easily spread,” Malik said.

Malik and all her family caught the virus during the first wave last year. They all survived, but the experience convinced her to join a local council-run program called COVID-19 Health Champions to disseminate accurate information about the pandemic and combat misunderstandings and denial.

“I needed to do something about this. I needed to spread the word and make everyone aware that this is a real thing,” Malik said.

The Champions have formed a network that updates thousands of Newham residents on the latest advice about the disease. And it’s helping to dispel some of the myths around vaccination, for example the story that has circulated on social media that the vaccines contain animal products or alcohol and therefore are “haram,” or prohibited for Muslims.

Nigerian–born Olanrewaju Odunlami, 75, is another local resident and COVID Health Champion. He has been countering vaccine myths among some of his more impressionable neighbors.

“They believe from what they’ve heard from their friends that it’s a dangerous drug that is to depopulate the Black community,” Odunlami said.

Historic scandals associated with unethical treatment of Black people in medical research combined with distrust of British authorities have led to a widespread aversion to the vaccines among ethnic minority groups across Britain, leading to lower immunization rates.

In Newham, Odunlami has been doing his bit to tackle that “vaccine hesitancy.”

“I took a snapshot when I was having the vaccination, and I sent it around to all our group,” he said.

Could this be a modern version of the Blitz spirit that helped Londoners survive the bombing 80 years ago?

Certainly there seems to be the same heartfelt drive to help neighbors in a time of adversity, not just with accurate information, guidance and advice, but by checking up on the elderly and vulnerable, getting their shopping in, making sure they’re safe and well.

What is different from the Blitz is that in this crisis, help and friendship have been extended among many different communities, across boundaries of language and ethnicity.

“We have 130 different cultures from around the world here,” declared Darren Rodwell, leader of the council in the neighboring borough of Barking and Dagenham. “But our great strength is that we’ve been looking out for one another. We’ve had 85 different organizations working with the council to reach out to and support around 30,000 families.”

In Newham, Malik said, “we’re all helping each other. It doesn’t depend on where you come from. There’s no discrimination. We’ve become so much closer, and everybody seems so much more generous.”

And Anne Bowers, who runs the COVID Champions project in Newham but lives in another part of London, said she had been astonished by the community cohesion she’s encountered in the borough.

“It’s incredible, incredible,” she said. “It’s been such a privilege to be linked with people from every community in Newham who are sharing and supporting each other. It’s been the greatest privilege of my working life.”

But despite this heartwarming story of human solidarity, the pandemic, like the Blitz in the 1940s, has blighted many lives and is leaving a trail of severe economic damage across the East End. In Barking and Dagenham, council leader Rodwell said he expected the pre-COVID-19 number of families on welfare in his borough to triple — to 50,000 — by the spring.