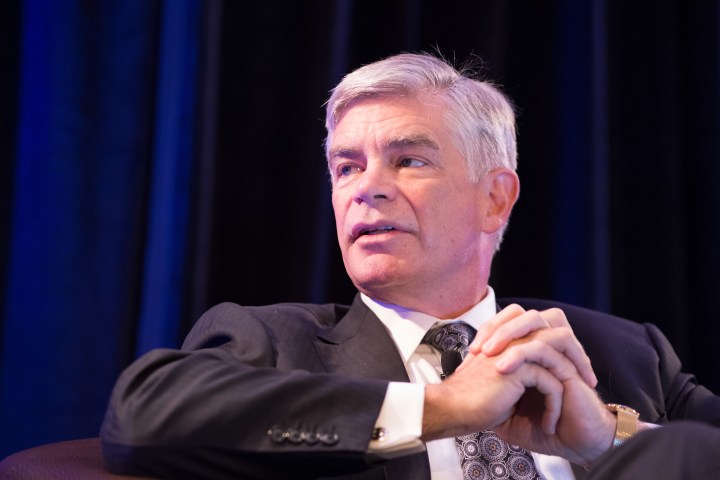 Some jobs lost during the pandemic will never come back. In part, that’s due to automation — something that was happening long before the coronavirus emerged.

“Firms were automating, but in some cases, they’ve accelerated that process during this pandemic because machines don’t get viruses,” said Patrick Harker, president and CEO of the Federal Reserve Bank of Philadelphia, in an interview with Marketplace’s David Brancaccio.

It’s happening in the sectors you might think of as hard-hit by automation, like manufacturing, but also less-obvious sectors like retail and hospitality. People of color are being impacted particularly hard by automation-related job loss.

Harker’s team at the Philadelphia Fed has developed a new online tool, the Occupational Mobility Explorer, to help workers without bachelor’s degrees (whose jobs are most vulnerable to automation) identify “opportunity occupations”: new jobs they could do with only modest training or upskilling that pay significantly more than their old job. People around the country can use the tool to find opportunity occupations in their area.

Across 33 metro areas, Harker found that about half of jobs can upskill into a similar job with an average annual salary increase of $15,000.

“This is a tool not just for employees looking to upskill, but also for public officials looking at developing programs, community colleges, job training programs to really focus in on: Where are the jobs of the future? Where are the jobs that are growing that can move people into the middle class?” Harker said.

Brancaccio spoke with Harker about how the Occupational Mobility Explorer works and how it might be used to inform policy. The following is an edited transcript of their conversation.

David Brancaccio: If we could just get people vaccinated, and then the presumption of so many is we can get people back to work again. But your research is showing that some companies may not need as many people in the end.

Patrick Harker: Right. So a couple of things are going on in the economy. Obviously, the virus is driving where we are in the economy right now. But there were trends that were happening even before the virus hit — trends in retail, or higher education — trends lots of different industries are changing. And the pandemic has just accelerated those changes. One of those changes is automation. Firms were automating, but in some cases, they’ve accelerated that process during this pandemic because machines don’t get viruses. And so that has led to people possibly not being able to go back at least to their old job, which puts real emphasis on the need to rescale and upskill people for the new economy that’s going to be coming post-pandemic.

Brancaccio: We here on this program have kept the focus on automation software and robots disrupting the labor market, for better or for worse. But you’re saying this pandemic, in the end, what — companies figured out that they might just invest in more technology and not actually have to hire a vulnerable person?

Harker: Sure. So if you think about the basic cost-benefit analysis any firm would do in deciding on deploying technology, they’ll run the numbers, but there’s always a bit of a fudge factor there, right? You’re not quite sure whether you’re going to make that investment, whether the investment has reached your hurdle rate, what you think you need to make in order to make the investment. Now, because of the pandemic, people are saying, “You know, the fudge factor is leaning toward me making the investment in the technology. Either I can’t get the workers I need, particularly for skilled positions, or in other cases, I’m concerned about what life is going to look like post-pandemic, so I’m going to make that decision right now to make the investment.”

Brancaccio: Do you have a sense of which sectors stand out as places where you’re seeing this?

Harker: Well, obviously we’ve seen a constant drumbeat of automation in manufacturing. But we’re starting to see this more and more in areas like retail. But people often overlook, it’s not just about a website you’re buying things on. It’s all the back-office logistics that are going on, highly automated, in one of these warehouses and in the distribution system. So yeah, there are a lot of people, but it’s a lot of technology being deployed that you don’t normally see in a typical brick-and-mortar retail establishment.

Brancaccio: Yeah, I’ve seen those little robots scurrying through warehouses, picking things off shelves. You can see what the issue is there. Now, it’s my understanding that especially vulnerable, as jobs are lost to technology, a lot of those jobs are held by people of color?

Harker: Absolutely. If you think about the people who have been hit most, [they] are people particularly in hospitality and leisure, travel and tourism. And many of those people who have those jobs are lower-income and minority individuals who have been hit hard. And again, this is where our research that we’re doing at the Philly Fed, and really across the system, is really focused on what do we do about that? We shouldn’t just accept that these people won’t be able to find new work. We need to find creative ways to get them the jobs they need, the skills they need for the future.

Brancaccio: Your team has developed a website that’s not like a job posting board or anything. It’s something else.

Harker: Yeah. So this is based on research we’ve been doing in Philadelphia, and also some colleagues in Cleveland, based on a really simple question that people asked a while ago: What are the jobs that pay above-median wages where you don’t necessarily need a four-year college degree? We call those “opportunity occupations” — jobs that have an upside; jobs that can get you into life-sustaining, family-sustaining work.

We looked at 33 metro areas across the U.S. And what we found out was about half the jobs you could upskill into a better job with an average increase in annual salary of $15,000 — real money for people. That, then, led us to dig even deeper. And we’ve now developed what we call the Occupational Mobility Explorer. And this is a resource to help workers identify pathways from lower-paying occupations to similar higher-paying jobs. In other words, we looked at the skill set somebody has now and asked, “With some training, upskilling, but not a massive upskilling, is there a job that they could take that would give them an increase in salary?”

And you can look at this explorer, you can actually drill down by metro area to see not only what the increase in salary would be, but also what are the growth of those jobs. So are those jobs shrinking in the economy or are they growing in the economy? So, say a receptionist and Philadelphia — they may have the skills needed to become a medical secretary. And medical secretaries, on average, pay 27% more than a receptionist. So that’s a good bump. But there are other such jobs all throughout the economy. Another one would be, for example, say you’re a bill collector in Philadelphia — you may have the skills necessary to become a credit counselor. And that job would pay, on average, 45% more than the job you’re currently in. So this is a tool not just for employees looking to upskill, but also for public officials looking at developing programs, community colleges, job-training programs to really focus in on: Where are the jobs of the future? Where are the jobs that are growing that can move people into the middle class?

Brancaccio: You just alluded to this. Because if you’re a regional planner thinking about what are we going to develop here in this region for the future knowing all this disruption is coming from technology, globalization, you name it — I’ve often asked people around the country, “What are the jobs of the future in your area?” And there was a lot of head scratching. This might be able to answer that question.

Harker: Absolutely. At least for the 33 metro areas we’ve looked at. And again, over time, we hope to expand this work. This is the kind of thinking we need. And if you think about before the pandemic, I know it’s hard for people to remember before the pandemic, but labor markets were tight, companies were being much more creative and thinking about how they get the workers they needed for the future. We want to get back there. That’s the goal, to get back to that situation. But that still means we need to help people who have been sidelined in the economy to get the skills they need. And this tool can help with that.

Brancaccio: This seems like a public service. What are you hearing? Does it actually work for actual individuals who would go in and consult it?

Harker: So it’s still early early days, we just launched this. But yeah, we’re hearing from particularly people who are working with these individuals that this tool can really help them hone in on the type of skills that they need. And by the way, this was something that’s grown out of decades of research at the Philly Fed and across the Federal Reserve System in trying to understand the dynamics of the labor market, and in this case, through our community development function at the Fed, how to get people into those jobs of the future.

Policy and other support for emerging jobs in the U.S. economy

Brancaccio: Now, this seems useful, but given calculations I’ve seen about disruption to be caused by technology in the next 5, 10 or 20 years, I assume you’d want to see wider policy measures put into place that would support someone who wants to get retrained in the right thing.

Harker: Oh, absolutely. In addition to this, there are a lot of new jobs that are emerging. For example, in my old life, I used to be president of the University of Delaware — we created a cybersecurity set of programs. You think of cybersecurity, “Oh, I need a Ph.D. to do that” — no. An associate’s degree, for many entry-level jobs in cybersecurity, is more than sufficient to get you into that work. And so we actually developed some of those programs in concert with the U.S. Army down in Aberdeen, Maryland. These are good jobs that are entry jobs into a new world, a world that if you go back a decade, how many cybersecurity jobs were there? So while automation is taking away jobs, there are other jobs that are always emerging in an economy, cybersecurity being just one example, where we need to start getting people into those career paths.