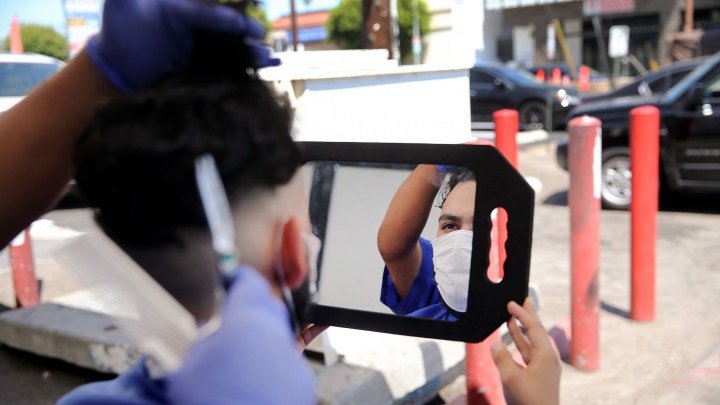 A client gets a haircut at a barbershop operating outdoors last summer in Los Angeles. Mario Tama/Getty Images
Listen Now

“It was like a speak-easy,” said Ari, whose last name is being withheld because she violated the order. She owns a salon in Oakland and told her employees they didn’t have to come in. Those who wanted to worked out a schedule.

“So we all picked a day where we were the only one in that space, and that was our day,” she said.

This was the second shutdown in California, and Ari said she didn’t know how she could pay her bills without any income. She applied for Paycheck Protection Program loans twice, and said she was denied both times without explanation.

“I definitely had moments where I’m like ‘I don’t know if I’ll make it,'” Ari said. “It was really crushing.”

For some, staying open came at an extra risk, like Lauren, whose last name we’re also withholding. She runs another Oakland salon and stayed open by papering over the windows.

“I’m immunocompromised, so I was really kind of screening the people, you know, just to make sure that they were being safe,” she said.

But Lauren said she saw no other options. The rent bills were piling up, and the winter lockdown came at the worst possible moment for her business.

“Among my friends in the industry just, everybody just felt that hit,” she said. “It’s almost guaranteed that’s going to be your busiest month; it’s December.”

Lauren’s barbershop has been open for less than a year, so she wasn’t eligible for the PPP loans.

The California Department of Public Health and the Alameda County Public Health Department didn’t respond to requests for comment. But there are fines for salons that violate state orders, and some could lose their licenses. The Professional Beauty Federation of California, a trade group, sued the state last month to overturn the order.

“The last thing you want to do is force these primarily women, many women of color and first-generation immigrants, is incentivize them to go underground,” Fred Jones, the group’s lawyer, said.

Pam Martinez, who runs a salon in San Marcos, outside of San Diego, stayed closed during lockdown and has been dealing with clients who, during that time, turned to amateur stylists.

“I have one customer that has a third-degree skin burn. She needs to go see a doctor, and I won’t touch her because I’m afraid,” she said.

Now, with the order lifted, she’s suddenly booked solid for the next three months. Martinez is thrilled, but also concerned about another shutdown. California is still in the grips of infection. So for now, she’s cutting, coloring and coiffing like there’s no tomorrow.