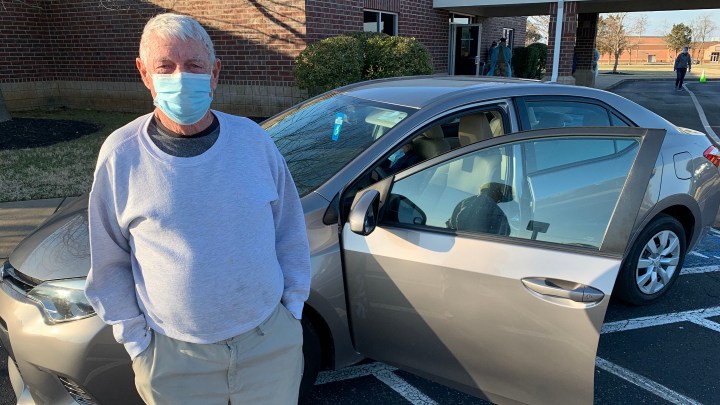 COPY
David Gibbs, 86, raced down to a church on short notice to get vaccinated against the coronavirus. However, seniors who are homebound, don't drive or don't use the internet may find it harder to arrange a vaccination. Blake Farmer/WPLN News
Fast-Track Vaccines

David Gibbs, 86, raced down to a church on short notice to get vaccinated against the coronavirus. However, seniors who are homebound, don't drive or don't use the internet may find it harder to arrange a vaccination. Blake Farmer/WPLN News
Listen Now

Some states are weeks into vaccinating seniors against COVID-19. And in that time, they’ve learned a lot about the perils of scheduling an unpredictable supply of doses from the federal government.

In Tennessee, last-minute appointments seem to be a workable solution, though there’s a risk of leaving some behind.

Being summoned to get a shot has been a pleasant surprise for many seniors. David Gibbs, 86, said he and his wife were happy to race down to a church in the town of Lebanon that was hosting the county health department’s drive-through vaccinations.

Most of Tennessee’s local health departments started out having people go online to claim their appointment times. That was abandoned a few weeks in, partly because the state has no guarantee of how many doses will come from manufacturers, and it usually only has a firm number 48 hours in advance. That meant rescheduling appointments if there wasn’t enough vaccine.

Also, some people wouldn’t show up to their appointments, resulting in extra doses that needed to be used before they spoiled.

Many local health departments moved to a system in which people put their name on a list and then just wait for a call. And that list can appear really long. Sharon Erdman of Mount Juliet, Tennessee, 77, saw online there were 900 people in front of her and her husband.

“I thought we’re never going to get in until maybe February,” she said. “I was just shocked when I got the call this morning to come today. I said, ‘Be right there.’ ”

But not everyone can act so quickly.

Some seniors can no longer drive and would need more time to find a ride. Some might have to use public transportation, which adds another layer of complication since most county vaccination sites are geared toward people in cars.

For this reason, the city of San Antonio is considering enlisting the help of Meals on Wheels. Corpus Christi, Texas, may send paramedics to the homes of those who are homebound.

“Otherwise, we’re just going to tell people, ‘If you don’t have car keys, you don’t get a vaccine.’ And that’s inherently unfair,” he said.

Already, statistics on COVID-19 vaccinations in Tennessee and elsewhere are revealing some of the same disparities that have long persisted in health care, which, Haile said, indicates that well-off, mostly white people are having an easier time finding their way to the front of the line.