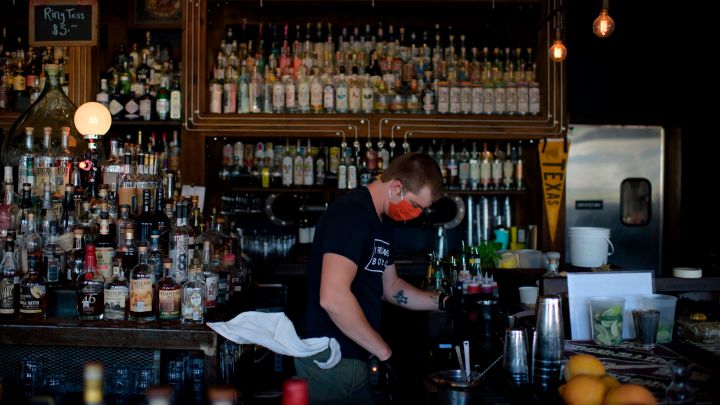 COPY
Some bartenders and servers are wondering whether the risk is worth the reward. Mark Felix/AFP via Getty Images
COVID-19

Some bartenders and servers are wondering whether the risk is worth the reward. Mark Felix/AFP via Getty Images
Listen Now

Robert Bjorn Taylor’s pretty typical of people who tend bar, especially in college towns like Austin, Texas. He was an arty kid who was just slinging drinks for pocket money when he was in school.

“I know when I started 16 years ago, I didn’t think of it as a career,” Taylor said. He did it to make tips and generate income while he was in school. “So I was just hoping, OK, this is just to survive. So I can do my creative stuff.”

Working jobs as servers and bartenders has long been a fallback for young people who want to make some money while they pursue other careers — in music or art, for instance — or just figure out what career is right for them.

But Taylor kept moving up. He got jobs at better bars with more responsibility. By this time last year, he was the guy designing the cocktails for a group of hotels in Austin. It had become his career, but he still wasn’t psyched about it.

“I kind of got to the management level. And I was like, ‘Well, I don’t like that,'” Taylor said. “I was still just doing the job because it was my job — and, I felt, necessary.”

Then, just before the biggest event on Austin’s annual calendar, the South by Southwest arts and entertainment festival, COVID-19 hit. Taylor was furloughed, and he started wondering whether this career he’d stumbled into was worth sticking with.

Addie Hauber wondered the same thing. She’s been bartending in Austin for about as long as Taylor. She currently works 18 hours a week at a brewery called Central Machine Works to pay the bills, but she’s been thinking about whether now is the time to make a change.

“I have a bachelor’s degree, but I’ve only ever worked in restaurants since I was 15,” Hauber said. “I don’t really have a whole lot of experience besides restaurants. And is the pandemic a great time to try to go out and get new industry experience?”

She just turned 30 and she’s always wanted to work with the elderly, she said, but worries she won’t have that opportunity without an advanced degree.

“That’s a market that, from my understanding, is always needing people,” Hauber said. “And it still is pretty hard to break into, even with a college degree, even with 15 years of continuous job experience.”

Other bartenders and servers have responded by taking on a bunch of gig work.

“I literally have, like, five to six jobs now just trying to get by,” said Austinite Elizabeth Mathis. She’s teaching a virtual painting class, running photo booths at corporate events and bartending weddings.

Before the pandemic, she was a bartender at a place called Javelina. And when bars and restaurants shut down, she was laid off. She said that being forced to cut herself free from the service industry was a good thing for a couple of reasons.

“One was because it wasn’t serving my career ambitions well,” she said. “And, two, the risk. The risk wasn’t worth the reward.”

The reward for bartenders and servers is highest when the places where they work are packed. But that’s also when they face the highest risk of infection. Another conundrum is that a lot of them end up loving the industry.

“I didn’t necessarily want to abandon it, you know?” Taylor said. “I don’t know, there was just like, kind of feeling in my heart that I still needed to kind of, like, contribute.”

Taylor figured out how to get the best of both worlds by pivoting. He now works for an Austin-based cocktail-kit delivery service called Sourced.

“So I’ve embraced the virtual market,” he said. “Doing virtual happy hours, providing kits for people at home to still get this sort of experience that you enjoy going out.”

And, he said, his experience behind the bar is crucial to helping make that happen.