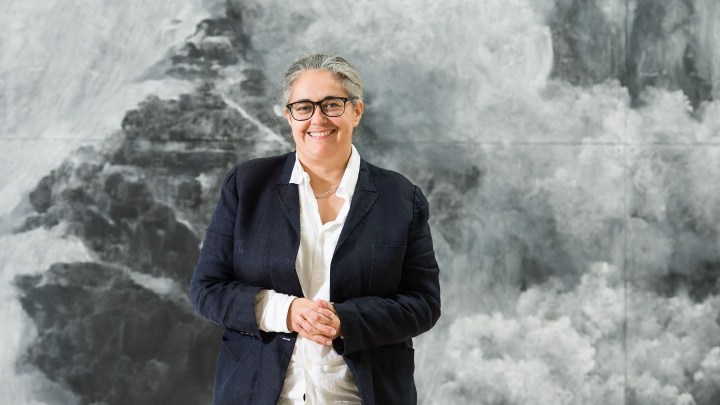 A painting or a print is not a knock-off if the artists themselves make the copies.

Today the Marian Goodman Gallery in New York is opening an exhibition on what are called “multiples,” a movement that art critic and author Blake Gopnik says got high-end art into the homes of people who are not rich, families like his.

“In the 1960s, there was a movement to fight what was a really brand new high-end market by making challenging art in larger editions,” Gopnik said, “making it available to anyone who wanted it, instead of it being just something for the high end.”

The following is an edited transcript of Gopnik’s conversation about multiples with “Marketplace Morning Report” host David Brancaccio.

David Brancaccio: These multiples helped shape you and the whole Gopnik family? You have a stake in the story?

Blake Gopnik: Yeah, I’m afraid so. When I was a kid, I grew up surrounded by art, by mostly pop artists like Roy Lichtenstein or Claes Oldenburg. And I guess I didn’t really realize until recently, that all of these works that my poor, young, academic assistant professor parents bought, were produced by this company in New York called Multiples, Inc. And they were the target market for it. The idea was to make all of this brand new art accessible, and my parents bought it, hook, line and sinker. And I don’t think I’d be an art critic today if I hadn’t grown up surrounded by that art.

“The point of multiples was never to provide easy art for every living room. This was about presenting challenging art for anyone who wanted it.”

Brancaccio: And some of the multiples that your folks got was challenging art?

Gopnik: Yeah, I think it’s important to realize that the point of multiples was never to provide easy art for every living room. This was about presenting challenging art for anyone who wanted it. Because of course, before that, high-end art always went for a fortune, or at least for the decade before multiples came along.

Brancaccio: I mean, it makes things more accessible. But I guess economics often says that if one is precious, 300 of the same thing would be less valuable. I know printmakers don’t see it that way, they tend to do editions.

Gopnik: It’s certainly true that something that comes out as a multiple is less valuable on the market. But part of the point of multiples was to push back against the market. And their being cheaper, and their being not unique, was part of the point. They were supposed to be about mass production. They use the materials of mass production, like plastic. They used actual fabricators, you know, from the world of everyday commodities, like banner-makers, to make these objects. So it was really a pushback against the whole notion of uniqueness that the high-end market had always been built on.

Brancaccio: The modern world, though, is — it’s hard to even think of multiples. I mean, look what musical artists do. They make multiples for a living. They don’t want just to make just one record. And with things being downloadable, it’s just a whole new world.

Gopnik: Yeah, it’s funny, you know. I wrote about a couple of very current artists who work in multiples. And what they do is they kind of make multiples by hand, they push back against the digital, they push back even against the machine made. So this artist called Danh Vo, a Danish artist, he got his father to hand-copy out a letter from the 19th century about 2,000 times. His multiple is actually a handmade multiple, which is a kind of contradiction in terms, but that’s what they’re interested in. The best artists today are playing with the very idea of the edition. They’re not buying into it. They’re not making it easier. They’re actually making it harder.

Brancaccio: He made his father do all that work?

Gopnik: He didn’t just make his father do it, he paid his father. Not a huge amount of money. His father got something like $125 per letter. But his father was a very humble man who, you know, owned food stalls and little restaurants in Denmark, so he was happy to make a nice little supplement to his retirement income by copying out this letter by hand.