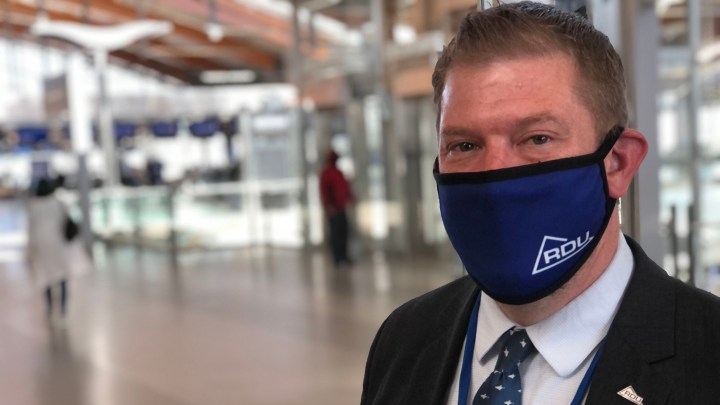 COPY
Kenneth Strickland, director of air service development at Raleigh-Durham International Airport. RDU is working with a nearby analytics firm to look at other data, like hotel bookings and rental car reservations, that could be helpful for predicting travel. Leoneda Inge
COVID-19

Kenneth Strickland, director of air service development at Raleigh-Durham International Airport. RDU is working with a nearby analytics firm to look at other data, like hotel bookings and rental car reservations, that could be helpful for predicting travel. Leoneda Inge
Listen Now

As a passenger heading to Las Vegas from Raleigh-Durham International Airport, Christopher Burwell Sr. was a rarity at the airport late last year. Burwell said despite travel warnings due to COVID-19, he had to get away.

“Vacation!” Burwell said. “Being considered an essential worker, I had an opportunity to actually relax and get some time off to myself.”

With air traffic down because of the pandemic, airport officials have found it hard to plan and forecast who’s flying when. Travel forecasting tries to predict how many passengers will be going through an airport’s gates, and it’s important for the airline industry.

“So, it’s critically important that we get this right,” said Kenneth Strickland, the director of air service development at Raleigh-Durham. “We were kind of in a situation where we did not know where to turn.”

In 2019, the airport reported that a record 14.2 million travelers flew through RDU. Airport officials expected that 2020 was shaping up to be even bigger. Then the COVID-19 pandemic hit.

RDU announced last year that, due to the pandemic, it had to revise its budget and cut spending by nearly 45%. The airport also deferred $96 million in capital projects.

Strickland said that with the pandemic, all of the old methods of forecasting passenger traffic — airline seat capacity and economic indicators like gross domestic product — weren’t working.

“People that were projecting, ‘hey this is going to be a one- to two-month event and then we’re back to normal,’ all the way to ‘this is a decade’s worth of declines,'” Strickland said.

It turns out there is a whole lot of other data airports have not been looking at that could be helpful.

“Hotel reservations would be one,” said Anthony Mancuso, director of consulting with the analytics company SAS. “If you wanted to, restaurants, sightseeing. If people want to go back to New York, they are going to start looking at, what time does the Statue of Liberty open?”

SAS is located near RDU, and says it offered to help the airport with its forecasting at no charge. One of the things Mancuso suggested is tracking car rentals.

“You can download the number of people who have searched for rental cars,” Mancuso said. “And that’s usually an indication that someone’s going to travel somewhere. So it’s an alternative source of data that they hadn’t used before.”

A much better predictor than GDP these days. SAS said since it’s been working with Raleigh-Durham, it’s gotten calls from several other airports for forecasting help, both in the U.S. and abroad.