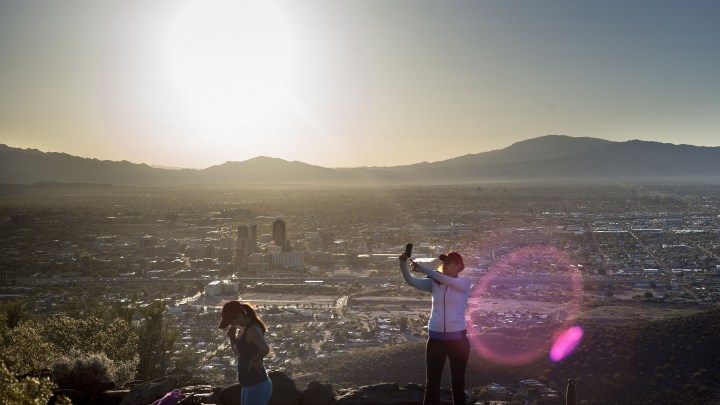 COPY
The program is starting off with a pilot to relocate 10 people. They must have a job that exists elsewhere and they have to be willing to make Tucson home for at least a year. Brendan Smialowski/AFP via Getty Images

The program is starting off with a pilot to relocate 10 people. They must have a job that exists elsewhere and they have to be willing to make Tucson home for at least a year. Brendan Smialowski/AFP via Getty Images
Listen Now

The pandemic has hurt economies all over the world, and has even changed migration patterns, as some people leave big cities across the country to take advantage of technology that allows them to work remotely. One city in Arizona is now wooing those workers.

Tucson is known for its more than 300 days of sunshine a year, normally a lure for college students and snowbirds. Now, a nonprofit with funding from the city has started a program to lure working professionals.

“You’ve seen all these stories of people who work from home or they’ve been working from home. Big cities are not necessarily as attractive,” said Liz Pocock, CEO of the nonprofit that runs Remote Tucson. It’s offering people who relocate about $7,500 in incentives, including moving money, a year of internet service, a workspace, and an “ambassador” to help them settle in.

“People are looking for different quality of life. They’re looking to connect with their communities in different ways,” she said.

The program is starting off with a pilot to relocate 10 people. They must have a job that exists elsewhere and they have to be willing to make Tucson home for at least a year. It is modeled after a similar program in Tulsa, Oklahoma.

Zach Yentzer is executive director of Tucson Young Professionals, one of the groups helping to fund the program. He will be one of the ambassadors who will work with people who relocate.

“We make sure they have all their questions answered,” Yentzer said. “That they’re connected into the basics of, where do I live, where do I work, where do I shop, where do I play.”

Tucson has a little more than half a million people. That’s one draw Remote Tucson is banking on as it tries to attract high-income workers from bigger cities. Another is the climate.

Rogers hopes the program will eventually attract 50 to 70 people every year. And when people arrive, they’ll be facing a tight real estate market. Median home prices are about $265,000, so homes are selling fast.

Britney Griffith and her husband moved to Tucson this summer. They were told they needed to bid above asking price to get a home. “Which is a crazy thought,” Griffith said, “that there’s no room for negotiation for homes right now.”

Remote Tucson has been taking applications since November. There were 200 applicants in the first week.