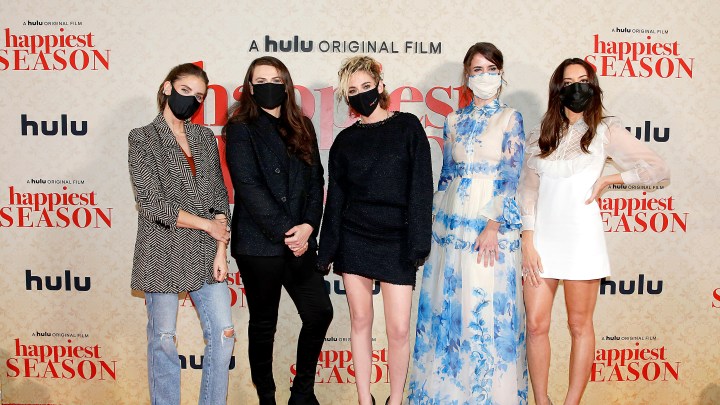 COPY
The cast and crew of Hulu's "Happiest Season" at the movie's drive-in premiere on Nov. 17 in Los Angeles. Rachel Murray/Getty Images for Hulu

The cast and crew of Hulu's "Happiest Season" at the movie's drive-in premiere on Nov. 17 in Los Angeles. Rachel Murray/Getty Images for Hulu
Listen Now

It’s that time of year again, in which we get an avalanche of holiday movies: the bad, the good, the downright cheesy.

This year, in the onslaught of streaming holiday specials from Hulu, Hallmark and Lifetime, there’s been a notable increase in films with LGBTQ storylines, featuring same-sex couples.

Viewers and critics alike wonder if these movies signal a lasting update to a well-worn genre.

“Happiest Season,” one of Hulu’s holiday movies, starts out with a lesbian couple, Abby and Harper, heading to visit Harper’s family together for the first time. But, turns out, Harper isn’t out to her family. She’s told them that Abby, played by Kristen Stewart, is just a roommate.

The movie has gotten attention for bringing a gay couple into the cinnamon-scented milquetoast Christmas genre. It’s also been criticized as cruel, archaic and underplaying a topic that is painful for many people: fear of coming out and having to lie to your closest relatives.

The wave of new LGBTQ holiday movies includes titles where people are out, like Paramount Network’s “Dashing in December” and Hallmark’s “The Christmas House.”

Aymar Jean Christian, professor of communication studies at Northwestern University, said TV has traditionally been a place for stories that take risks, because it’s cheaper to make.

“Unlike regular movies where you are getting people to pay [for] tickets to the box office, TV movies have been a smaller financial investment for networks,” Christian said, adding that this is, in part, a product of the streaming wars.

But in important ways, these movies do not break new ground, said Kathleen Battles, a professor at Oakland University. She focuses on sexual identity in the media and says the gay and lesbian characters are essentially being planted into very traditional holiday movie storylines.

“None of this disrupts the fundamental conservative structure of these films, which always have this return to small-town life and small-town values, and they’re very conservative,” she said.

Battles said there’s only so much you can ask of the holiday movie genre, which she says isn’t going to break new ground anytime soon.

For that kind of cinema, there are other genres, and 11 other months of the year.