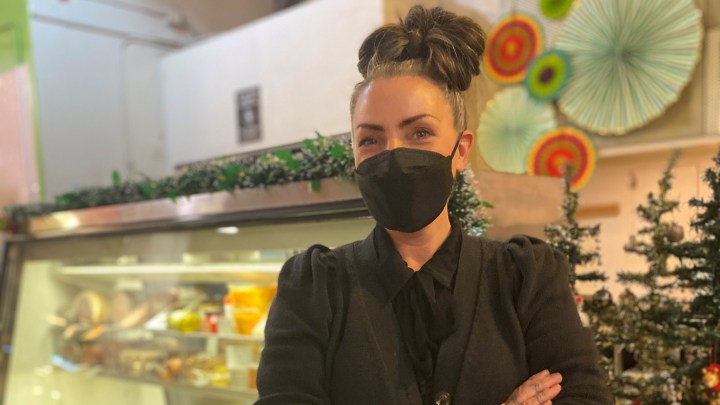 Lydia Clarke opened her second cheese shop, DTLA Cheese, in Grand Central Market in 2013. As a cheesemonger, Clarke said she is naturally interested in stories, but she also really loves cheese. What attracted her the most to the downtown Los Angeles landmark was its 100-year history.

“When I walk in here, there’s a pride of the steps because somebody has worked here for over 100 years,” said Clarke. “The history that’s in this building has just so dramatically changed since March.”

Since the COVID-19 pandemic, Clarke said she sees about one-tenth of the customer base she had before March. Her business is not doing well.

“If things go how they are this week, we could make payroll, and then that’s probably it,” said Clarke.

Late last year, some of her cheeses were hit with the Trump administration’s 25% tariff on imported goods, and she had to raise prices a bit. But the coronavirus pandemic has made things much more difficult.

She’s made many changes to her shop, which she co-owns with her sister. With COVID-19 safety measures, Clarke can no longer offer cheese tastings from behind the counter. There is no more downtown LA lunch rush, and she’s had to lay off half her already small staff.