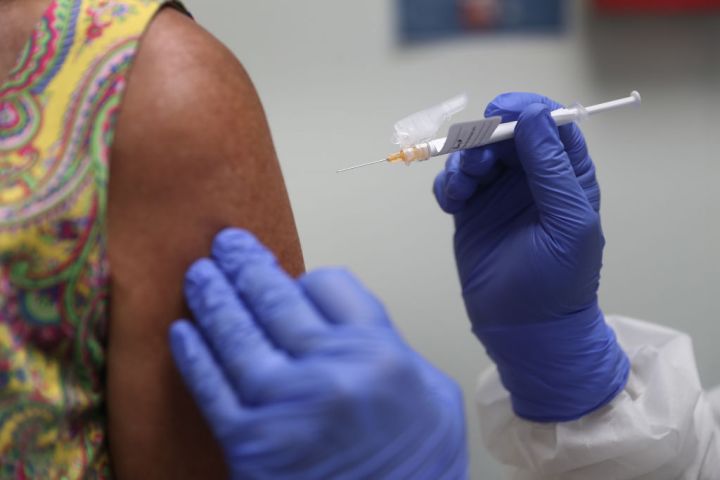 COPY
Lisa Taylor receives a COVID-19 vaccination from RN Jose Muniz, as she takes part in a vaccine study at Research Centers of America on Aug. 07, 2020 in Hollywood, Florida. Joe Raedle/Getty Images
COVID-19

Lisa Taylor receives a COVID-19 vaccination from RN Jose Muniz, as she takes part in a vaccine study at Research Centers of America on Aug. 07, 2020 in Hollywood, Florida. Joe Raedle/Getty Images
Listen Now

A growing number of people are now saying they’ll get the COVID-19 vaccine when they can — 60% of Americans would do so, according to a study out from Pew Research this week. That’s significantly higher than it was just two months ago. But it’s still not high enough to get the pandemic under control. And the number is much lower among Black Americans — just over 40% say they would definitely or probably get a vaccine.

So, what’s it going to take to get more people on board?

There’s a saying in public health that vaccines don’t save lives, vaccinations save lives.

James Colgrove, a professor of public health at Columbia University, said that means “it’s not going to do anybody any good unless you get it into people’s bodies. People have to be willing to line up and roll up their sleeves.”

The key to getting more people to do that, he added, is trust.

Right now, the nonprofit group the Ad Council and a group of experts called the COVID Collaborative are trying to raise $50 million for a public education campaign.

Steven Jumper of the digital creative agency GhostNote said people who are hesitant will need to see data and hear from people they trust.

“It’s going to be important that trusted faces, advisers and leaders in communities, both locally and nationally, are seen on camera endorsing this vaccine,” he said.

President-elect Joe Biden and former Presidents Obama, Bush and Clinton have all already said they’ll do that.

Experts said an effective campaign will also have to involve clergy, primary care doctors and local community leaders. People who know — and look like — the people they’re talking to. That will be particularly important in the Black community, said Thomas LaVeist, dean of public health at Tulane University.

“I’ve given some thought to maybe getting together a group of African American scientists … who can speak to the African American community and say, as scientists, we have reviewed this, and we are willing to take this vaccine,” he said.

For some people, he said, it also might take time, and seeing the vaccine start to work in communities like their own.