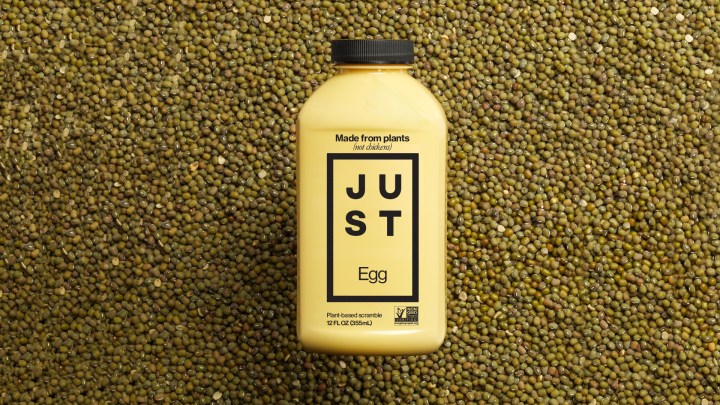 COPY
A U.S. startup company hopes Chinese consumers will buy its plant-based egg product. For some, though, cost is a factor. Courtesy of Eat Just
COVID-19

A U.S. startup company hopes Chinese consumers will buy its plant-based egg product. For some, though, cost is a factor. Courtesy of Eat Just
Listen Now

In the heart of Shanghai’s Jingan commercial district, an American firm set up a test kitchen to put its twist on a Chinese classic — golden fried rice.

Chef Yang Beichuan covers a bowl of cooked rice with a thick, yellow egg mixture — though the “liquid egg” is actually made from mung beans.

He said plant-based egg is not a great leap in Chinese cuisine.

In Shanghai, vegan chicken made from soy is readily available at noodle shops.

“I think there’s a market [in China] that people really want to try new things,” he said.

The U.S. startup behind the plant-based egg and the cooking demonstration, Eat Just, said the Chinese market has been part of its business plan from day one.

China’s market is not only big, but the authorities have the COVID-19 pandemic controlled well enough that last month, the firm could hold a series of cooking demonstrations where face masks were optional.

Many American firms have looked to Chinese consumers to keep them afloat this year.

The head of Domino’s Pizza has called China a “terrific success story of 2020,” while spice maker McCormick & Co said Chinese consumers have been its lifeline during the pandemic.

However, some sectors that want Chinese consumers to spend more will find the going tough as medical, education, housing and retirement costs continue to weigh on them.

“My pension would not be enough to survive on.”

China’s consumption figures appear promising. Retail sales bounced back in August after being stifled by the pandemic, and consumption has steadily picked up each successive month.

Retiree Hua Meiying, a former employee at a state-owned enterprise, attended the Eat Just cooking demonstration. She said she hasn’t cut back her spending.

“When I buy food, I care more about whether it’s nutritional. That is even more important now with the pandemic,” she said.

A bottle of Eat Just’s plant-based egg, which is equivalent to eight chicken eggs, costs 49 yuan ($7.40) because of import taxes and fees. That’s about double what it sells for in the U.S.

But that price does not deter Hua and her husband.

They recently bought a German cooking appliance, the Thermomix. A basic model sells for $1,800 in China, which is more than the average monthly salary in Shanghai.

However, even before the pandemic, Chinese households on average saved a lot because the communist country has a weak social safety net.

Mao Xiuzhen, 83, is a retired government doctor in Shanghai, as was her husband. In theory, they have some of the best health insurance in China, but it does not cover all medical bills.

“My husband was sick for three years. We had to move from one rehabilitation facility to another every two months. He had six strokes in three years, became paralyzed at a nursing home and passed away a few months ago,” Mao said.

Luckily, Mao still has a pension that covers her stay at a new government retirement home and can rely on her son to support her.

His 6-year-old takes a mix of extra English, math and logic classes, which costs Zhang $3,000 a year.

If he wants his son to get into one of Shanghai’s best universities, he will need to buy a property in the Chinese financial capital, which will be challenging.

“Apartments in Shanghai are too expensive, and even if I had the money, it would take me five to six years just to qualify to buy one,” Zhang said.

China’s strict household registration system, or “hukou,” does not grant full rights in the city to people from the countryside like Zhang.

He will earn points in Shanghai by, for example, upgrading his technical diploma to a bachelor’s degree, which is costing him another $3,000 a year.

Also, he must make sure he and his employer have fully paid into the city’s social welfare fund.

If not, he needs to make up the shortfall.

Zhang said he saves 30% of his salary.

Back at the cooking demo, participant Andrea Liu, 49, said she also saves a lot, even after putting her daughter through five years of study in the U.S.

“My daughter will get married, and I will need to prepare money for her wedding and for my retirement,” she said. “My pension would not be enough to survive on.”

Yet Liu said she is willing to spend on little luxuries like $7 for a bottle of plant-based egg.

Already it is working to bring down its costs. It wants to sell the key ingredient to big food companies and have the product finished in China.

The company would have to bring costs way down to appeal to the likes of entrepreneur Selena Yuan.

The plant-based egg is “very tasty. It has the same texture as chicken eggs,” she said after popping a tofu-based egg roll into her mouth at the cooking demonstration.

But Yuan, a self-described carnivore, is weighed down by her mortgage payment. She said she would not consider buying the plant-based egg at $7 a bottle.

“If you compare the plant-based egg price to chicken eggs, the latter is more cost-effective,” she said.