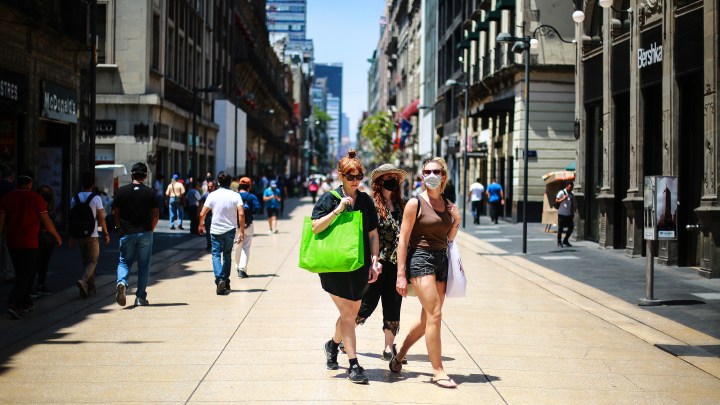 Before the pandemic, the main square of Valle de Bravo would have plenty of visitors at dusk. But now, the square of this tourism-driven town in central Mexico is closed, and only the birds are back.

Since mid-July, the government is allowing hotels to operate at just 30% of their capacity, following strict sanitizing rules and hygiene protocols.

Juan García, who manages the Puesta del Sol hotel in Valle de Bravo, said in Spanish that they worry about asymptomatic guests, but the main concern all over town is the lack of visitors.

Tourists from the United States are the main source of foreign tourism in Mexico. But the country’s tourism industry is struggling to lure foreign visitors as it adapts to the pandemic’s “new normal.”

García said the state government has supported tourism businesses by temporarily eliminating the occupancy tax that’s usually charged to hotel guests. But many people, like artisans or boat drivers, depend on tourists, too.

Roberto Zapata, the tourism vice president of Mexico’s National Chamber of Commerce, said he was expecting tourism to grow in 2020. And now?

Zapata said about 9% of Mexico’s gross domestic product comes from the tourism sector, which he said has been losing around $180 million per day since the pandemic started in March.

“We have 10 million people that are employees of the tourism in the different areas,” he said.

Zapata said some local authorities have been supportive of business owners, but he’s critical of the Mexican government.

“So, yeah, we’re just doing everything by ourselves; that’s a fact,” he said.

Obrador has said he is optimistic, and that tourism is going up, forecasting that things will get back to normal by the end of the year.

Meanwhile, the pandemic is not the only thing that has hurt tourism, as hurricanes have been hitting the Caribbean coasts.

In Cancún, workers had to use chain saws to clear the damage left by Hurricane Delta in early October.

Laura Orrostieta owns Cancún Transfers and Tours, a company in the Mayan Riviera. She said she has noticed a slight return of visitors, particularly from the rest of Mexico and the U.S., and said she’s feeling more optimistic.