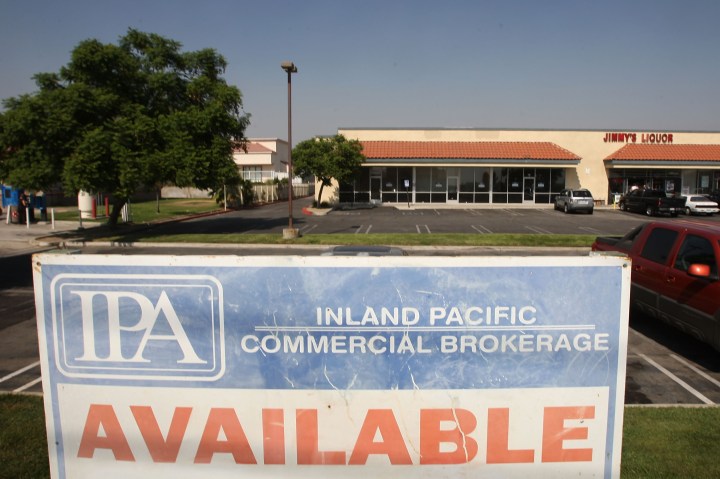 Retail stores, restaurants, and other businesses across the country are closing because of the pandemic. That’s leaving many workers unemployed, a crisis that’s hitting Black and Hispanic or Latinx Americans especially hard.

“Marketplace” host Kai Ryssdal met up with Arturo Sneider, the co-founder and CEO of Primestor Development, a real estate company that invests primarily in underserved neighborhoods in Southern California. They met at Plaza La Alameda, a shopping center Primestor owns in Walnut Park, a neighborhood in Los Angeles County.

“This is a transitional neighborhood that was historically a fringe industrial warehousing district that became a very dominant Latino and African American neighborhood,” Sneider said. “We assembled a fairly large area here to create jobs and bring in services and businesses we didn’t have.”

Pre-pandemic, the unemployment rate in the area surrounding Walnut Park hovered around 4%. That skyrocketed up to 14% in September, according to the latest data from the Bureau of Labor Statistics.

“It’s always been my desire to create an economic change inside the neighborhood,” Sneider said. “And I didn’t think that anybody was gonna do it that didn’t understand the dynamics of the culture.”

Sneider immigrated to the United States from Mexico in 1986 and founded Primestor six years later, after seeing the lack of economic opportunity for Black and Latinx people in parts of California. The following is an edited transcript of Sneider and Ryssdal’s conversation at Plaza La Alameda.

Kai Ryssdal: So let’s do a quick 360 here and just see who’s here. Right? I mean, just right off the bat, you’ve got a Jamba Juice and a Panda Express. So clearly, major chains saw the opportunity too. Now did you have to sell them on this?

Arturo Sneider: Yes, the first 10 years of this endeavor, people thought I was out of my mind, and I thought so too many times. They wouldn’t return our calls, and there would be no real interest, until we started understanding how to educate the market and the scale of the opportunity. And what we do is we partner with local businesses, local entrepreneurs. A lot of the Latino and Black community, they have so much talent, so much skill, working for other companies and other businesses, and these next generations want to open and operate their own businesses. So that’s why we colocate them with traffic-generating businesses. But we require that all of our businesses hire locally for construction, for permanent jobs, for everything.

Ryssdal: Tell me about then the labor pool that you draw from or that your customers, I guess, or your tenants draw from around here, right? I mean, they can go out and they can find these people?

Sneider: Oh yeah, the demand is just extraordinary in terms of jobs, seeking jobs. What we’ve worked on over the last many decades is creating a bigger opportunity for job training. And when I first started, there wasn’t any of that, it was just sort of pulling people from other markets, but who lived here. Instead of having them commute to work, they would be able to work right here.

Ryssdal: So let’s just, I want to walk for just a little bit, and we’ll get away from the armored car. And help me understand how you came to design this place as it is, right, because you’ve got a little plaza here across the street from some kind of big box. As you said about designing this, what were you trying to do? Because design is the key element of getting people in the door.

Sneider: Yeah, so the concept of zócalo —

Sneider: Yeah, that that’s the concept here. And we took exactly the materials, and even the landscaping materials, the finishes and the traditional kiosk. And one of the key elements here at the time was no fences, no gates, no walls. These are neighborhoods that traditionally had been built with that in mind. And we took not only that, but we put the bus stop directly into a turnout in the plaza, in the zócalo, so that it becomes integrated to the community.

Ryssdal: A lot of ceramic tiles and all kinds of cool stuff too.

Sneider: Yeah, this is a material of adoquín and azulejo from Mexico that we brought in and creating a place where we can have lots of activities. There’s programming here constantly. Dance events and performance events —

Ryssdal: Or used to be anyway, right? I mean, look, it’s kind of sad. You’ve got this great space.

Sneider: Yeah, you could see we cordoned off the children’s play area. The fountain is off, because we don’t want people congregating around that. But that’s the concept of it.

Ryssdal: Yeah. Give me your sense. As a guy whose business depends on the overall health of the economy, how are you feeling?

Sneider: One thing that I have found about my particular business model is that these communities are so underserved that the demand from the businesses that we have, believe it or not, is still driving our business.

Ryssdal: What does that mean? I don’t understand.

Sneider: Ross, Marshalls, Target. These businesses still need and want to open stores in these communities. Because when they look across the map, they find that they have too many stores already. But in these areas, they feel that they don’t have any stores.

Ryssdal: So the stores are in white neighborhoods and places that are easy to get to and not Black and brown places, right?

Sneider: Right. So they still have a huge growth potential there.

Sneider: I’m skeptical. We just opened Freedom Plaza in Watts. It was 15 years in the making. That was the transformation of the Jordan Downs project, which I worked on for nearly 15 years. So that opened. That gives you some hope. But seeing the the chaos that we’ve seen as a result of George Floyd incident and others, and seeing the lack of velocity and response, I’m skeptical still about it.