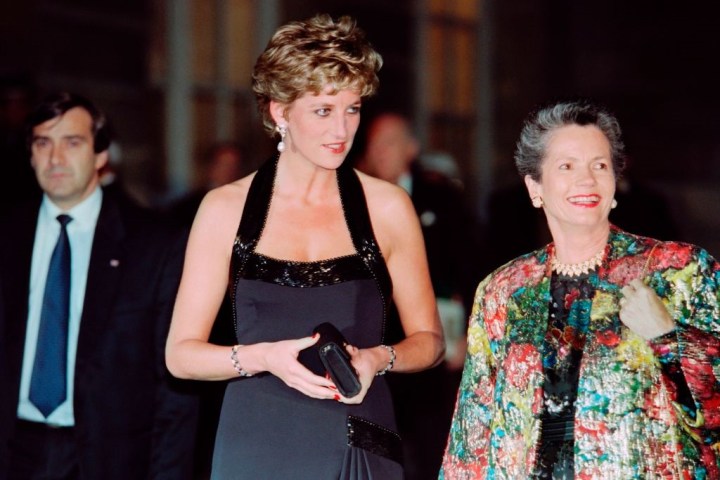 COPY
Princess Diana made fashion a part of the royal image. Above, she arrives at the Palace of Versailles in 1994 in a Catherine Walker black velvet and beaded evening gown. Joel Robine/AFP via Getty Images)

Princess Diana made fashion a part of the royal image. Above, she arrives at the Palace of Versailles in 1994 in a Catherine Walker black velvet and beaded evening gown. Joel Robine/AFP via Getty Images)
Listen Now

The fourth season of “The Crown,” released on Netflix Sunday, has it all: drama, history, intrigue. Also, fashion.

This season features some of the most iconic modern-day royal looks, including Princess Diana’s 1981 wedding gown, the infamous black-sheep sweater and the pink plaid pants she dons to skate around Buckingham Palace in the show.

In the decades since the Princess of Wales first used her clothing to communicate with the public, the business of royal fashion has boomed. What a royal wears on an official engagement can lead to sold-out items within minutes.

For example, back in 2018, a military-style coat made by Canadian fashion brand Mackage flew off the shelves after newly engaged Meghan Markle sported it five hours earlier while she did a public meet-and-greet in Nottingham, England.

Fashion houses benefit from a royal outing, but it’s fashion bloggers who play a key role in disseminating the information to the public at a lightning-fast speed, sending royal fans into a fashion feeding frenzy.

Elizabeth Holmes, veteran fashion journalist and author of the new book “HRH: So Many Thoughts on Royal Style,” explains how it all works.

Below is her conversation with the BBC’s Victoria Craig on the global edition of the “Marketplace Morning Report.”

Elizabeth Holmes: Back in Diana’s day, and I didn’t fully appreciate this before I started researching my book, a lot of the brands that she wore, they weren’t credited in real time. The designers she worked with, she had very close relationships, a lot of them were friends of hers. And she would wear something and people would admire it. But there wasn’t this clamoring to know who made it and how to buy it and could they wear it, too. People were certainly inspired by her fashion and wore clothes that looked a lot like hers, but the brands weren’t shouting from the rooftops.

Victoria Craig: It’s not just the brands that benefit from this sort of royal bounce, but it’s the blogs that document all these pieces. They can make money from so-called affiliate sales, or some even have their own replicas or riffs on the outfits or jewelry that some of these members of the royal family wear.

Holmes: They’re real sleuths! In the minute Kate [Middleton] or Meghan [Markle] step out, they get to work and try and identify what they’re wearing and try to offer up a link to it. Oftentimes, that is an affiliate link so they can get either a percentage of the sale of that item. They offer up more affordable alternatives. With Kate, they’re called “repli-Kates.” And people want to dress like the duchesses, and there are bloggers, certainly, that are able to make a living off of that.

Craig: You mentioned Princess Diana, and I don’t think you can mention the royal family and fashion without thinking of Princess Diana. Her fashion had staying power. And this year, two iconic sweaters of hers have gone on sale. They’re replicas, of course, and they carry hefty price tags. They’re about $300 each. How are we 20, 25 years later, and these designs are still very relevant something people want to own?

Holmes: I think it speaks to the power of Diana’s fashion and how much a part it is of her legacy. What she did was infuse emotion into the equation. And you can see that in these sweaters that have been remade. One of them is the infamous black sheep sweater with white sheep and a single black one. And she wore it twice to Charles’ polo matches. And it just immediately sent this very cheeky message. And Diana understood not just the language of clothing, but the emotion behind it.

Craig: And Kate herself has kind of used this messaging to somewhat make herself more relatable, especially now during the pandemic. We’ve seen her step out in more mid-range clothing from U.K. chains.

Holmes: Yeah, I think what Kate did for royal fashion was make it accessible because she was choosing things that you can afford and that you could pick up right away. There’s real power in that — you could see yourself as part of this very storied institution. And it continued this theme that Diana, the people’s princess, had started.

Meghan Markle, the Duchess of Sussex

Craig: In your book, you also talk about Meghan Markle, the Duchess of Sussex, and how she brought her own spin to all of this — her formula and the branding strategy that she developed during her time as a senior royal. How did she sort of change this royal fashion game?

Holmes: You know, I think Meghan entered the royal family several steps ahead, certainly of Diana and Kate, in terms of her familiarity with fashion because of her time as an actress. She had worked on set with a costume designer. And language of clothing is really important in television and movies. She knew all of the chatter online, she was very familiar. And, clearly, she was an influencer in her own right before all this. So she knew sort of the language of clothes, she chose very carefully, especially the colors, early on. We saw her in 2018, she wore a lot of blush-colored dresses. And as I was watching in real time, I was like, “What? What’s going on? Why is she wearing so many pink dresses?” And if you rewind just a couple years, she had given an interview where she talks about her character on “Suits.” And when her character was falling in love, she tended to wear blush tones because it sort of represented that love. And I thought, “Wow, you know, she’s taking what she learned in her time as an actress and applying it to her royal life. And how smart of her.”

Craig: We’re talking about all the positive aspects of royal fashion, but it doesn’t always work. Sometimes the royals wade into controversy, unintentionally, with the brands that they do wear, don’t they?

Holmes: Yeah, I think when you’re talking about the language of clothing, you’re putting so much attention on what they’re wearing that there’s bound to be a downside. Kate has worn Dolce & Gabbana several times after that brand has been caught up in many controversies, especially around some racist remarks. And we will never know what these women are thinking when they’re making those choices, or if they’re aware, if they know. But I don’t think it’s fair to sort of praise them for the high points without sort of calling out the missteps.

What about men’s fashion?

Craig: Your book focuses on four of the most talked about royal women: Queen Elizabeth, Meghan Markle, Kate and Diana. Of course, there’s so much focus on what these royal women wear, but what about the men? Do they dress for purpose and messaging, too?

Holmes: You know, I think they do. We can have a much bigger conversation — and I think it’s about time — about why society as a whole focuses so much on what women wear. And the fact of the matter is, that’s sort of the reality we’re living in now. And I think the women in my book, certainly recognize that, and I think it’s very smart of them to sort of harness that attention and use it as part of their duties.

That said, I think that the men — and you’re seeing this, I think, increasingly with Prince William — they recognize the conversation, and they are dabbling in it a little bit.

[Last year] when William stepped out of a rickshaw in Pakistan, and he was wearing sort of an emerald green traditional dress, people went nuts. It was so exciting. And Kate was next to him in a fantastic beaded Jenny Packham gown. But all of the eyes were on William and what he was doing. And what’s important to understand about royal fashion is it’s a real opportunity for the royal family, because they give speeches, but they don’t divulge a bunch of personal information. They don’t tend to give big, revealing interviews. What they do is they show up, and photographs of those appearances go around the world in seconds. And like it or not, the first thing that we all see is what they’re wearing. And if we like it, if it’s exciting, if it’s interesting in some way to us, then maybe we’ll read the caption that goes with the photograph. Or maybe we’ll read the first couple paragraphs of a story. And it opens the door to learn more about their charitable pursuits, about the events they’re attending, about the causes they’re supporting. And so when you have a fashion moment in there, and it gets a lot of play, that brings more attention to their work, and I think they want that.