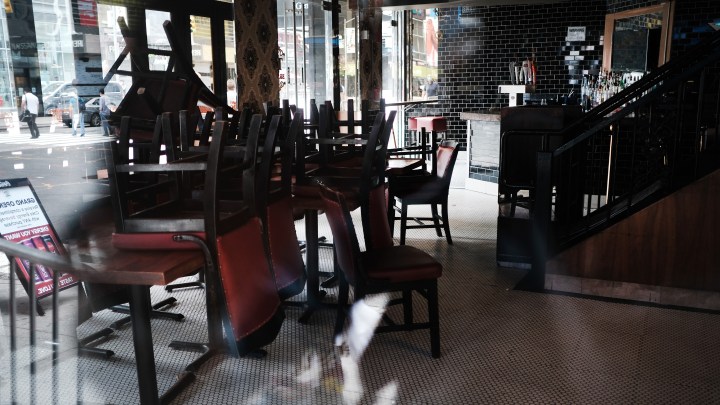 Back in April, optometrist David McBride had to shut down his vision clinic in Portland, Oregon, for seven weeks. When it reopened, patients came back — but McBride couldn’t bill them for another 45 days.

“We were paying staff, with really no revenue coming in, because we had seven weeks of no billing,” McBride said.

But by then, McBride had received a $54,000 Paycheck Protection Program loan. That money helped him pay staff and make rent after the clinic reopened.

“It was a lifeline for us, as we started getting up and running again,” McBride said. “It would have been difficult to get where we’re at right now without that little influx of capital.”

It’s been seven months since businesses started applying for PPP loans — one of the main legs of the federal government’s attempt to save the economy as the COVID-19 pandemic struck. Those loans helped many businesses survive through lockdowns and rebuild once the economy started to open up again.

McBride said about 70% of his business has returned. His next step is getting his loan forgiven, which was the part of the original plan for the program.

He said he’s confident that his business meets the requirements for forgiveness, but he hasn’t applied yet. Businesses that borrowed $50,000 or less can use a simpler forgiveness form, though McBride’s loan is just above that threshold. And those rules could always change. In the meantime, many business advocates have been calling for automatic forgiveness on loans less than $150,000.

“I’m just hoping for a general forgiveness, so I don’t have to do any more paperwork,” McBride said.

His accountant, Lorilyn Wilson, said she’s been telling many of her clients to wait and see if Congress will make the process any easier.

“People are just like ‘Can I apply now? … Is it deductible? Is it simple?’” Wilson said.

Not all PPP recipients have been as lucky. Wilson says some of her clients, including restaurant and bar owners, are still struggling — especially now that COVID-19 cases are on the rise.

“In terms of keeping their doors open, the PPP loan forgiveness has taken a back seat to that,” Wilson said.

And for some PPP recipients, keeping the doors open just hasn’t been possible.

“The PPP loan was something that gave us a runway, but it didn’t solve the problem,” said Emmeline Zhao, a partner at the Manhattan-based Little Tong Noodle Shop. “It couldn’t control for the fact that consumers just weren’t purchasing or going out.”

Most offices near the Midtown restaurant are still closed. Zhao’s PPP loan helped the restaurant reopen in May, but a few months later, Zhao started to realize that the numbers just weren’t adding up.

“That’s just the very, very difficult conclusion that you have to come to,” Zhao said. “That if you can’t cover overhead, then, unfortunately, the business has to shutter.”

“It’s the circle of life, and we can’t be upset about it, because we just figure out how to come out of this stronger,” Zhao said.

Zhao is hopeful the restaurant will reopen at some point in the future, but she doesn’t see that happening for at least another year.