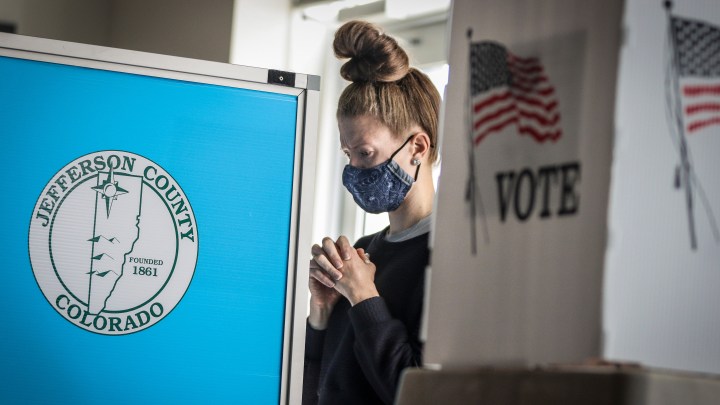 A voter turns in her ballot in Edgewater, Colorado, on Nov. 3. Colorado is the first state to pass paid family leave through a ballot measure. Marc Piscotty/Getty Images
Elections 2020

A voter turns in her ballot in Edgewater, Colorado, on Nov. 3. Colorado is the first state to pass paid family leave through a ballot measure. Marc Piscotty/Getty Images

After six years of Colorado’s state legislature trying and failing to pass a paid family and medical leave program, the state’s voters approved a ballot measure in Tuesday’s election.

The program allows for up to 12 weeks of leave, with an additional four weeks for qualifying pregnancy or childbirth complications. In addition to covering parental leave, it also covers personal injury, caring for a family member, needs related to a family member’s military deployment and leave for survivors of domestic violence or sexual assault.

The measure passed at a time when more women are leaving the workforce in what has been dubbed a she-cession during the COVID-19 pandemic as more jobs filled mostly by women disappeared. In addition, supervision of school-aged children who are home due to coronavirus falls disproportionately on women, with the latest Marketplace-Edison Research Poll showing that 63% of women say they are primarily responsible for helping their kids with online school. Four times more women than men left the workforce as the school year started up.

Congress did pass an emergency paid leave act — the Families First Coronavirus Response Act — at the start of the pandemic, allowing for two weeks paid leave. But, Christine Beckman, professor of public policy at the University of Southern California and author of “Dreams of the Overworked: Living, Working, and Parenting in the Digital Age,” said people didn’t use it, because they didn’t even know about it.

“We don’t have a history of even knowing that these things are possible in the U.S.,” she said. “So few people — 15% to 20% of private workers in the U.S. — even have access to paid leave. So it’s not something we think about a lot.”

Beckman said while the program doesn’t take effect until 2024, COVID-19 most likely helped amass support for Colorado’s measure because the pandemic has starkly highlighted just how challenging it is to be a working parent.

“When the pandemic happened and schools closed and daycare centers closed and everyone lost the scaffolding that sort of enabled them to work and take care of their children, it made really clear how important all of this help is to actually manage people’s lives,” she said.

A lot of research on paid family leave comes from studying the effect of California’s state-wide program, the first in the nation, said Alejandra Ros Pilarz, assistant professor in the school of social work at the University of Wisconsin-Madison. Paid family and medical leave helps keep women in the workforce and has long-term benefits. Moms who are able to stay attached to the labor force have better life-long employment trajectories and higher earnings, she said.

Not only does paid leave benefit women’s economic situations, it also contributes to GDP growth. An S&P Global study found that attracting more women to the workforce could grow GDP 5% to 10% in just a few decades.

Colorado’s program also has a tiered system based on the employee’s salary. Workers receive 65% to 90% of their weekly pay while on leave, with the lowest-income workers getting the highest percentage. This could help address inequality seen in California’s program, which has a set wage replacement of about 66%, Pilarz said. While the paid leave program is helpful, Pilarz said low-income moms still weren’t using the full duration of leave available.

“A really important piece of the design of these paid family leave programs is that they account for the fact that less educated, low-income and single moms have less income to fall back on when they’re taking the leave, and to make up for those lost wages,” she said.

Paving the way for other states

The momentum of these laws keeps growing; Pilarz said the pandemic is only highlighting the need for more family support. And Colorado passing this as a ballot measure — the first to do so — could pave the way for other states that have struggled to pass paid leave laws in the legislature.

“We pay attention to what other states are doing, right, and build on it,” Beckman said. “This does definitely seem like building off some of the efforts of earlier states and really expands longer. At 12 weeks — that says nothing by European standards, but for the U.S. that’s quite, quite, quite terrific.” 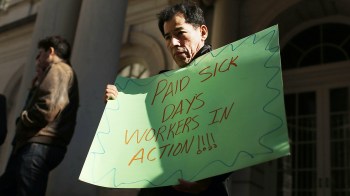