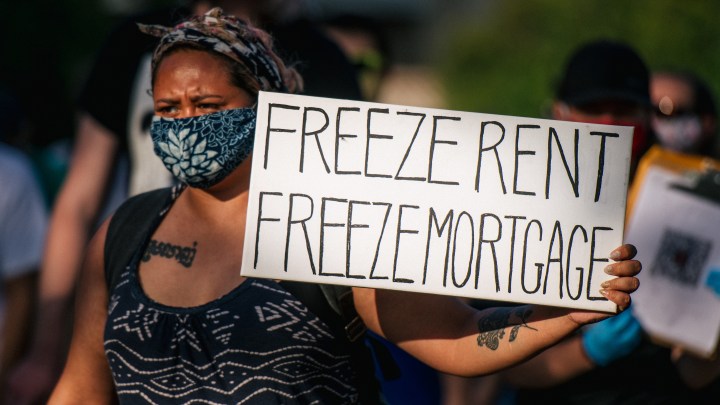 COPY
A woman marches during the Cancel Rent and Mortgages rally in June in Minneapolis. There are 2.9 million mortgages in active forbearance, according to a report Friday from mortgage data company Black Knight. Brandon Bell/Getty Images
COVID-19

A woman marches during the Cancel Rent and Mortgages rally in June in Minneapolis. There are 2.9 million mortgages in active forbearance, according to a report Friday from mortgage data company Black Knight. Brandon Bell/Getty Images
Listen Now

About a year and a half ago Emily Allen-Smith quit her job at the American Red Cross to turn her gardening hobby into a farming business in Plymouth, Ohio. She sells specialty produce, like heirloom tomatoes and Mexican sour gherkins, to high-end restaurants.

“It very much depended on that close, personal relationship with the chef,” she said. “That’s really been the struggle this year. A lot of chefs have quit, and a lot of the restaurants just aren’t serving at capacity.”

So back in May, struggling to pay their $800-per-month mortgage, she and her husband asked their lender to let them postpone their payments. Under the CARES Act, the pandemic relief package passed by Congress in March, borrowers with federally backed mortgages can reduce or pause their mortgage payments with no penalty.

“You know that they’re not going to take your house away right now,” Allen-Smith said. “So I’m going to spend my money on food and other things that aren’t as protected.”

Allen-Smith’s mortgage is among the 2.9 million in active forbearance, according to a report Friday from mortgage data company Black Knight. That’s down 40% from the peak in May. But in the past week, 87,000 loans have gone into new forbearance plans, the highest volume since mid-April.

“So there’s still a lot of stress out there in the market right now,” said Black Knight economist Andy Walden.

A lot of people are restarting plans that had expired, Walden said. The CARES Act allowed borrowers to pause their payments for six months, with the option to extend for another six months. Missed payments can be made up in a repayment plan or tacked on to the end of the loan term.

“There’s no question that individual consumers and families are paying the brunt of the price here,” he said. “First, you worry about getting sick, then you worry that you don’t have any money to pay your bills.”

In April, Damian Lopez-Gaston was furloughed from his job in the event and hospitality industry in Albuquerque, New Mexico. After the $600 weekly supplement to unemployment benefits expired in July, he called his mortgage lender.

“Ultimately all these people are unemployed not because they wanted to be unemployed, but because they were told to shut things down, and I assumed that the government would then look after people,” Lopez-Gaston said.

Though homeowners are protected from losing their homes, for now, Mierzwinski said some may see damage to their credit. Under the law, forbearance is not supposed to hurt a borrowers’ credit score, but according to complaints to the Consumer Financial Protection Bureau, that is happening to some borrowers.