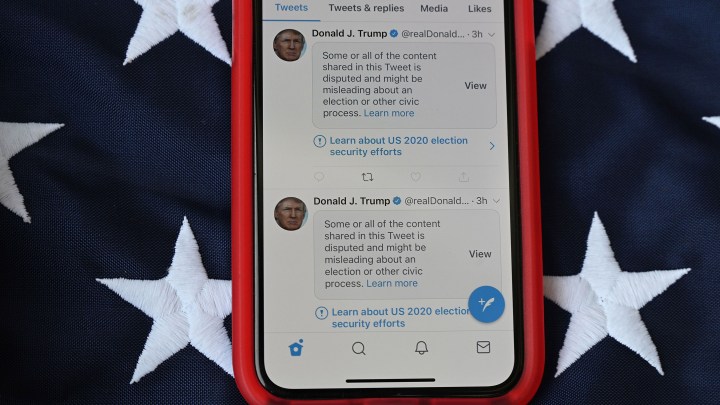 COPY
Since Election Day, Twitter has put about a third of President Donald Trump’s tweets behind a fact-check label. Robyn Beck/AFP via Getty Images
Elections 2020

Since Election Day, Twitter has put about a third of President Donald Trump’s tweets behind a fact-check label. Robyn Beck/AFP via Getty Images
Listen Now

Social media platforms have been stepping up their moderating operations amid election-related misinformation.

Facebook just banned a group called “Stop the Steal” formed to organize protests against Democrats “stealing the election,” an assertion based on no evidence.

Nova Safo: That group was rapidly gaining followers, more than 350,000 over the last day or so, before it was shut down. Facebook says it saw worrying calls for election-related violence from some of the group’s members. It also banned the “Stop the Steal” hashtag, and its limiting the spread of certain posts that its algorithms determine contain political misinformation.

This is not nothing, David.

It goes almost directly against Facebook’s business model. It and other platforms are in the business of disseminating information, keeping people scrolling through posts as long as possible and selling ads around all of that.

Policing content has become the central issue of a heated debate in Congress over regulating social media, and now we’re seeing those companies responding with more force.

David Brancaccio: What about the other social media platforms beyond Facebook?

Since Election Day, Twitter has put about a third of President Donald Trump’s tweets behind a fact-check label, and Snapchat also took down a video from Trump’s account that used a Joe Biden interview out of context to back up unsubstantiated voter fraud claims.