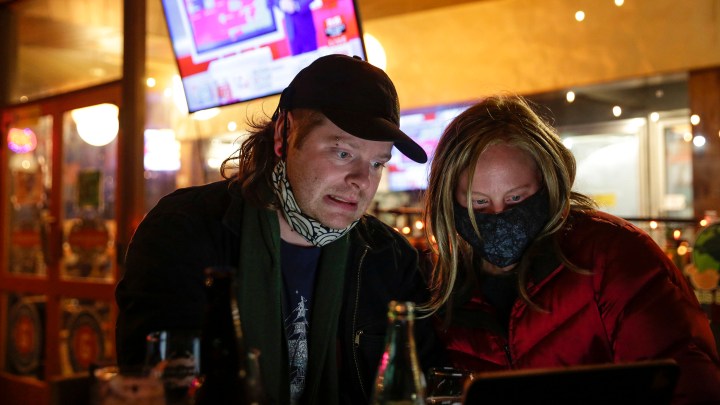 This year’s election and its aftermath have been causing a lot of anxiety for people all over the political spectrum. That’s distracting a lot of them when they’re supposed to be working.

All day on Election Day, and the day after, Raul Alvarez had one ear on the news and one ear on his work calls — literally.

“Unbeknownst to them, a lot of the times when we’re meeting, one of my headphones — I always had one on, literally it was on the news the entire day,” Alvarez said.

He does PR for a design firm in Grand Rapids, Michigan, and he said even with his dueling earbuds he’s still been managing to get a lot of work done.

Joanne Stoeker, however, has not. She’s a health care consultant in Orange County, California, and on Election Day she was “in all honesty, probably at about 30% productivity,” she said.

She was just too distracted worrying about the election. And then she stayed up late watching returns, so she decided to take a mental health day on Wednesday.

“I just needed the day to regroup and reorganize my thoughts,” Stoeker said. “I work directly with chronically ill patients and I need to be there. And I’m just not there today.”

A lot of people have been feeling that way the last couple of days, said Susan LaMotte, CEO of the consulting firm Exaqueo.

“The impact of the election on productivity at work is incredible this year,” LaMotte said. “You’ve got so many more people and workers who are voting, so that means they’re paying more attention.”

That has definitely been the case at Mehdi Farsi’s bicycle manufacturing company in Tempe, Arizona.

“Yeah, I mean, I can definitely hear the chatter in the hallways, people are staying engaged with it and following along,” Farsi said.

That, he said, is also what he’s been doing all day at work.

Every now and then, he said, he’ll tell himself that’s counterproductive and try to get work done for a while, before he inevitably checks the news again.

Fortunately, “this is not falling on a day where things are super critical,” Farsi said.

And, there’s really nothing anyone can do about it. Farsi said it’s just human nature to be drawn to something of this magnitude.