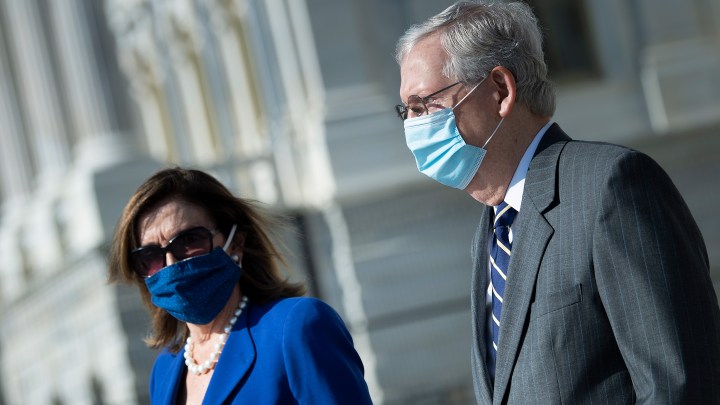 COPY
House Speaker Nancy Pelosi and Senate Majority Leader Mitch McConnell in July. A divided government will make it harder to pass COVID-19 relief, which has already been a challenge for politicians. Brendan Smialowski/Getty Images
COVID-19

House Speaker Nancy Pelosi and Senate Majority Leader Mitch McConnell in July. A divided government will make it harder to pass COVID-19 relief, which has already been a challenge for politicians. Brendan Smialowski/Getty Images
Listen Now

As of Wednesday afternoon, the makeup of the U.S. Senate remains in doubt, but it’s seeming less and less likely that Democrats will take control of the upper chamber, though they are on track to keep control of the House of Representatives.

Had there been a clear blue wave over the White House and Congress, Ian Shepherdson, chief economist at Pantheon Macroeconomics, expected lawmakers to spend $2 trillion to juice the economy.

That’s the same amount provided by the Coronavirus Aid, Relief and Economic Security Act passed in the spring, which supplied economic relief checks for people out of work, families and small businesses.

Now, he said he expects a far smaller boost.

“As we saw in the spring, the CARES Act put money into people’s pockets extremely rapidly because of the one-time stimulus payments, and because of the enhanced unemployment benefits, $600 a week to everybody,” Shepherdson said.

He said congressional spending works much faster, and in a more targeted way, than stimulus from the Federal Reserve.

“From an economist perspective, it’s a no brainer,” he said.

The Fed is meeting Wednesday and Thursday, and already slashed short-term interest rates in March.

“The question then becomes, what exactly can they do?” said Matthew Luzzetti, chief U.S. economist at Deutsche Bank Securities. “They’ve already cut interest rates to zero.”

Every month, the Fed buys $120 billion worth of bonds to push down longer-term interest rates. Going forward, Luzzetti said the Fed could pledge to buy more bonds or signal it’s willing to keep buying for a long time.

“The intent would be to put more downward pressure on interest rates, hopefully ease mortgage rates as well, to provide as much stimulus as they can to the economy in the absence of fiscal,” Luzetti said.

“Simply the Fed saying, ‘We’ve got the tools, we’ve got the ammunition,’ sort of pulling out the bazooka but not necessarily needing to use it, we saw the power of that. So my guess is, they would try to sort of use their words, to put it very bluntly,” she said.

Still, Fed Chair Jerome Powell has said the Fed needs help from Congress. In a speech last month, he said too little stimulus “would lead to a weak recovery.”