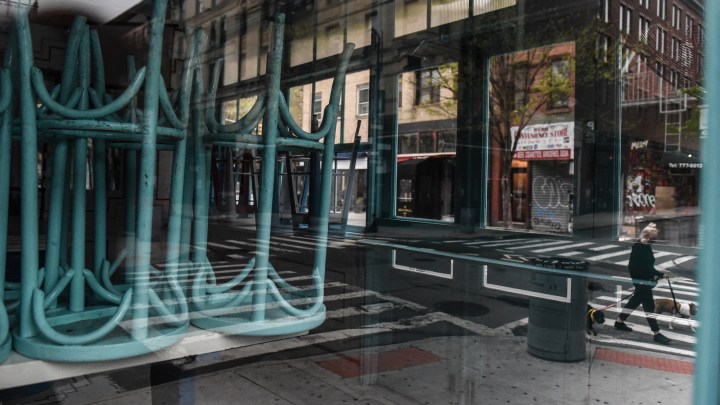 COPY
Chairs are stacked on tables at a closed restaurant in New York City. Many small businesses are waiting until they hear from Congress to apply for PPP loan forgiveness. Stephanie Keith/Getty Images
COVID-19

Chairs are stacked on tables at a closed restaurant in New York City. Many small businesses are waiting until they hear from Congress to apply for PPP loan forgiveness. Stephanie Keith/Getty Images
Listen Now

The uncertainty surrounding the health of the president and several members of Congress has implications for this COVID-19 economy — especially when it comes to the next round of stimulus and the future of the Paycheck Protection Program, which was established under the CARES Act and provided loans to small businesses during the pandemic.

Small businesses across the country are hoping for those loans to be forgiven, and the Treasury Department said it’s about to start forgiving Paycheck Protection Program loans sometime this week.

The thing is, the Small Business Administration recently said the amount of forgiveness applications it’s received amounts to just around 2% of all PPP borrowers. Many borrowers are simply waiting to apply until Congress gives more clarity. But the waiting game isn’t easy.

Figuring out whether a business is eligible for full forgiveness, partial forgiveness or none at all can be complicated.

Mark Frier owns three restaurants in Vermont. He said how much forgiveness he receives will help to determine whether his business can survive.

“That’s the most terrifying part, is we want to do everything we can to try to turn this into full forgiveness and not end up with debt.” he said. “Especially, not knowing if we’re even going to survive this.”

Frier hasn’t applied yet. He said he’s waiting to see if Congress decides to automatically forgive loans under a certain amount.

“[Of] course, that would be something we’d want to make sure we’d wait and hopefully line up with,” Frier said.

Some borrowers haven’t even been able to apply for forgiveness. Jackie Laundon runs a public health consultancy in Colorado. She said her lender hasn’t opened the portal it uses for forgiveness applications.

Every time she sees a new email from her lender?

Just in case her $15,000 loan isn’t forgiven, she’s making sure she has that amount set aside.

Laundon said she’d like to be able spend it, but she wonders, “Can I actually spend it without that feeling at the bottom of my stomach of uneasiness. Is this mine, or am I going to have to give it back?”

It’s been months since jewelry store owner Sophie Blake spent her PPP money. To control costs, she’s been trying to renegotiate her rent.

“We’re just asking for some sort of financial relief, because we were closed for three months, and that really impacted our business,” she said.

Blake said she’ll send in her forgiveness application within the next two weeks.