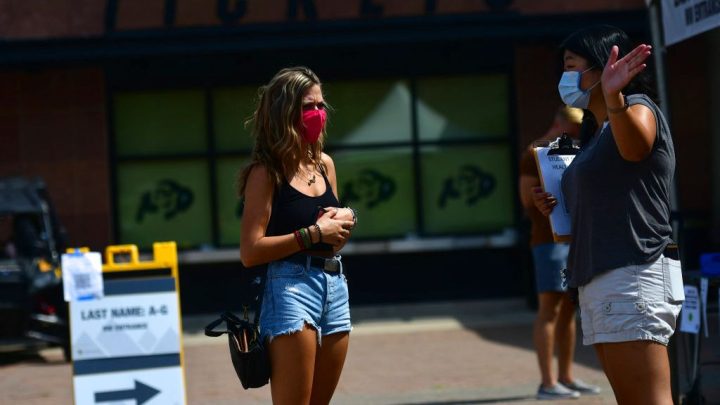 A student moving into the University of Colorado Boulder on Aug. 18, 2020. Mark Makela/Getty Images
Listen Now

The college admissions business is competitive — but not just for students. While the most selective schools receive far more applicants than they have seats, colleges on the other end of the spectrum are vying for applicants, often through mail packets and emails. The financial pressures colleges are facing due to COVID-19 could force this competition to become even tighter.

Jeff Selingo has covered higher education for decades. He recently followed both students and admissions officers for his book “Who Gets In and Why: A Year Inside College Admissions.” Click the audio player above to hear the interview. The following is an excerpt from the book.

Three admissions officers huddled in a windowless conference room are on a mission. Ahead of them awaits probably the most unpleasant part of their jobs: dashing the dreams of 242 applicants to Emory University’s prospective Class of 2023 before official acceptances go out in just a few weeks. Here in early March, the high school seniors have been admitted, tentatively, but statistical models the university uses to predict who will actually enroll indicate that too many of the record thirty thousand applicants for regular decision have been accepted so far.

This team of three is responsible for the southeast region. Of the five regional committees reviewing the high school seniors conditionally accepted to the freshman class, they must make the biggest cuts. While the Southeast team meets behind closed doors, so, too, do the other committees trying to move one thousand applications from the thin admit stack to the much larger deny or wait list piles, a process they call “shaping down.” The students will never know just how close they came to getting an offer for one of the 721 seats remaining in Emory’s freshman class.

“I wish we could tell kids they were an admit until like March 5, which is huge,” says Will Segura, his voice becoming ever so slightly higher-pitched as he turns to his two colleagues sitting at opposite ends of the table under the glare of fluorescent lights. “They don’t even know how we loved them.”

Will is an associate dean and chair of the Southeast committee. He needs to move eighty applicants out of the admit bin by the end of the day. That’s sixteen applicants an hour. The day before, the group made its job more difficult by “moving up” thirty-five applicants who were high priorities in this region to the accept pile.

The group agrees to divvy up the work to move quickly. They don’t want to readjudicate an applicant’s entire file; they want to see the applicant through a wider lens now that the admissions staff has a better idea of what the class as a whole looks like. Their first cut a few months ago was a rough sketch of the class; this one puts finer lines on the edges. And the following week, an even finer sorting will occur when they craft the final class. This process of shaping is a step at the very end of the admissions process that most teenagers and their parents are unaware of: for a tiny slice of applicants there isn’t just one look, but many.

The Southeast team starts with the hardest group of majors: natural sciences. These admission spots are among the most competitive at the university because they represent the most popular majors on campus: computer science, biology, and economics and mathematics. Will works from a spreadsheet of applicant names, arranged from lowest academic ratings (a combination of test scores and GPA) to highest.

The group moves swiftly through the docket fueled by CheezIts, bananas, and M&M’s scattered on the wood-paneled table in front of them like the remnants of a child’s candy bag dumped out on Halloween night. First up is a girl already marked as a “low admit” by the original reader—a breadcrumb left to identify applicants who barely cross the line and can easily be dropped later on. She scored a 1310 on the SAT and wants to major in biology. While she has taken eight of the twenty-three Advanced Placement courses offered by her high school, her midyear grades include a C in AP Environmental Science, a course considered the easiest of senior-level advanced science courses. After three minutes, the group moves her to the deny pile.

The admissions officers don’t spend much time talking about any one file. Most of those moved go from admit to deny, bypassing the wait list. They move one boy to deny after looking at his senior-year grades—lots of Bs—and note that they’ve already rejected four other academically stronger students in his school. They switch a legacy applicant—meaning a parent earned a degree from Emory—to deny because of his light extracurricular involvement. The original readers gave him a score of 2 out of 5 in that category, observing he wants to major in pre-med, “but we don’t see activities to support that.”

A half hour into their meeting, the group lands on a file that has multiple “tags.” The applicant is both a legacy and a child of an Emory employee. Because Emory employees receive tuition benefits for their children, moving an applicant from accept to deny at this point in the process would come at a steep cost for a family with a child so close to the line. The applicant has strong grades and a rigorous curriculum, but the overall file was described as “lackluster” by the original reader with ratings of 2 out of a possible 5 for both recommendations and intellectual curiosity.

“I’m sure there is plenty of goodness in the file,” Will says, “but in terms of natural sciences and what we’re looking at, I don’t believe this is that student.”

Someone else in the room pulls up the applicant’s midyear grades. They are all As. While the student lists neuroscience as a major, “there is no example of neuro in the file” in terms of activities or in the essays, the admissions officer says. She suggests they move the applicant to the wait list.

Another admissions advisor digs deeper into the applicant’s other interests. As she flips through the application, she struggles to find enough to keep the applicant in the admit pile. “I’d move to deny,” she says.

Will describes himself as “torn,” and turns to one colleague asking her why she’s in favor of the wait list. “The two tags are pretty significant,” she says. A wait list would be “a softer landing,” she adds. The applicant comes from a high school that’s a busy one for Emory. The other admissions officer looks at where the student ranks among the applicants from the school, a list that is a page and a half. This applicant is near the bottom of the first page. “If we’re looking strictly at natural sciences, it’s not there.”

Will calls for a vote, a rare occurrence this morning when they have usually agreed on most files. He wants to shift the file from accept to deny, while another admissions officer prefers the wait list. Their third colleague hedges. Will reminds her that this file will come back around for another review the following week because of the multiple tags. “From the perspective we’re supposed to be coming at now,” the wavering staff member says, “it’s a deny.”

The three admissions officers had debated the file for twelve minutes. It will be their longest deliberation about any applicant that morning. The following week, the student lands back in the admit pile after a review of hundreds of files with special tags like this one, and the week after that, the applicant receives an official acceptance to Emory University’s Class of 2023. The high school senior will never know how close he came to a rejection and how much the college’s priorities, in this case for children of  employees—rather than any particular aspect of his academic and personal life—played a role in getting him ultimately over the finish line.