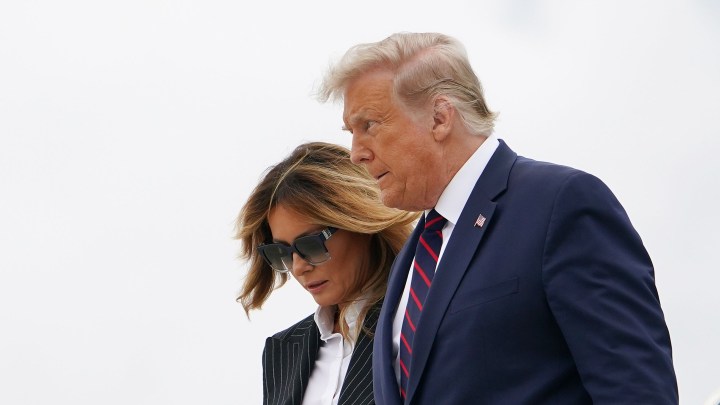 President Donald Trump’s overnight announcement that he, first lady Melania Trump and senior aide Hope Hicks have tested positive for coronavirus is shaking up financial markets. In this situation, the impulse is to sell stocks and buy bonds. In the half-hour after the Trump tweet, the Dow future fell about 450 points.

Michael Hewson, chief market analyst at CMC Markets in London, has been watching market activity, and the following is an edited transcript of his conversation with “Marketplace Morning Report” host David Brancaccio.

David Brancaccio: So the president announces he’s tested positive with his tweet in the middle of the night Washington time. That’s about 6 a.m. London time. What did you see on your screens?

Michael Hewson: Yeah, well, if I could just say, the health of U.S. presidents has always been a hot-button issue for financial markets. You’ve only got to go back to when [Ronald] Reagan got shot, to when George Bush Sr. fell ill at a banquet in Japan. Financial markets fell quite sharply, you know. So this time is no different to previous examples. I think the biggest concern, more than anything else, is the fact that we already had enormous amounts of uncertainty, in any case, and this just merely added to that.

Brancaccio: To say this introduced a note of uncertainty to financial markets doesn’t evoke the fact that there’s already a lot that is confusing and opaque to people trying to make financial decisions.

Hewson: Absolutely. I mean, if you look at the way the markets have been behaving in past three or four weeks, and the fact that people have been talking about an October surprise. Well, it’s no surprise that in October, volatility generally tends to pick up. It tends to happen on a fairly regular basis and has done so over the last 10 years. So when you’ve got Democrat and Republican politicians arguing about whether or not we’re going to get fiscal stimulus, coming off the back of a rather disappointing debate earlier this week, this is really the last thing the president needs at a time when he’s trailing in the polls.