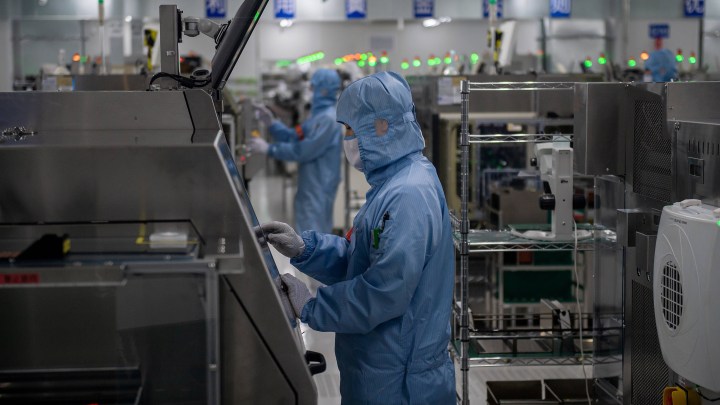 COPY
Workers build semiconductors at a factory in Beijing. The U.S. ban on doing business with SMIC is the latest in a long string of U.S.-China conflicts. Nicolas Asfouri/AFP via Getty Images

Workers build semiconductors at a factory in Beijing. The U.S. ban on doing business with SMIC is the latest in a long string of U.S.-China conflicts. Nicolas Asfouri/AFP via Getty Images
Listen Now

China’s top semiconductor company, SMIC, has had a rough two months. Since July its stock on the Hong Kong exchange has fallen to less than half its value.

The big problem for SMIC is U.S. sanctions. The Trump administration has long harbored suspicions that SMIC supplies Chinese military interests. And over the weekend, it was widely reported that the Commerce Department banned American tech companies from doing business with SMIC without special permission.

This is likely to escalate an already brewing U.S.-China technology conflict.

China is keen to pull ahead in artificial intelligence, electric cars and 5G. And its companies depend on American technology to make the computer chips to do that, said tech and telecom analyst John Strand at Strand Consult.

“When it comes to chips, China had tried to move into that industry for more than 50 years without success,” Strand said.

So the ban on U.S. sales to China’s SMIC will sting Beijing’s tech aspirations — and China could sting back.

“With the sanctions on SMIC, I’m sure there will be another shoe that drops in the U.S. And it’s not clear who it would be, but I think a lot of chip companies are just afraid,” said Linley Gwennap, a Silicon Valley semiconductor consultant with the Linley Group.

Beijing is assumed to be keeping its own list of American companies it could sanction.

But here’s the thing: Even though China’s gone tit-for-tat with Washington on the trade war, it’s kept its powder dry on the tech war, said Samm Sacks of the Paul Tsai China Center at Yale.

Beijing could shoot itself in the foot if it kicks out American tech firms it needs to build its future.

Still, Sacks said the United States going after China’s top chipmaker could get the Chinese to pull the trigger.