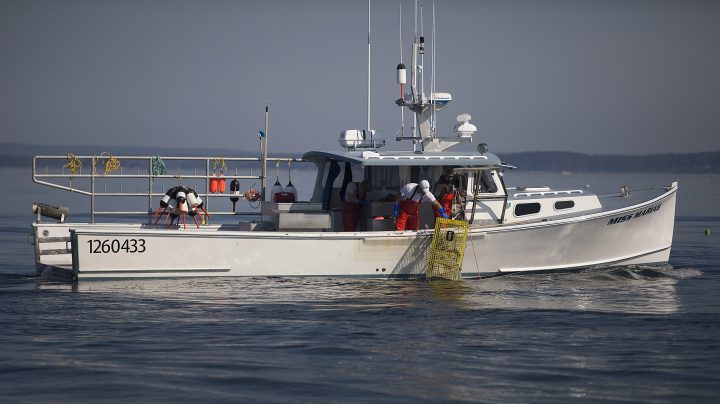 Captain Nick Muto of Chatham, Massachusetts, expected this summer’s lobster fishing to be a disaster.

With restaurant shutdowns and other supply chain issues, he was expecting to have to hustle hard to get good prices for his ocean delicacies.

But he was pleasantly surprised.

“I hate to say it out loud, but things are right now looking very good,” he said.

The price per pound had dropped somewhat early in the season, but is currently back up to the level it was last year, he said. And he hopes demand continues to improve in the last eight to 10 weeks of the lobster season.

Like many fishermen, Muto shifted to selling more lobsters directly into local markets, whether to restaurants or even right off the docks to consumers. And because he was concerned about his overall take, he played favorites with his buyers.

“I was trying to get every last penny I could out on my own. Anybody who has given me the most money for my lobsters, that’s where I was going,” he said. “Everybody was out for their own.”

Lobster fishermen are surviving the pandemic summer thanks to direct sales and better than expected pricing, but lobster wholesalers and dealers are struggling to pivot the supply chain from how lobsters are traditionally sold – -live, and to restaurants.

The CARES Act, for example, earmarked $300 million for the U.S. seafood sector in an effort to buoy the industry against economic disruptions.

McCarron, whose organization advocates for Maine lobster harvesters, said the PPP was not built to accommodate self-employed, commercial fishermen.

A lot of these harvesters don’t have business bank accounts. All expenses, both business and personal, are paid out of one account, McCarron said. This added to the struggles of local banks trying to get PPP money to small boat operators.

Still, the season was better than anticipated and prices were slightly higher than expected.

“Despite all of the grim predictions, I think people are going to squeak through this year,” she said.

Meanwhile, the U.S. Department of Agriculture rolled out a program unrelated to pandemic-induced losses called the Seafood Trade Relief Program. That initiative will  reimburse lobster harvesters 50 cents per pound of crustaceans they caught in 2019.

The problem is this program only benefits seafood harvesters, not the rest of the seafood supply chain.

In 2019, Maine lobstermen landed more than 100 million pounds of lobster. The supply chain is made up of the businesses that process, sell, and export lobsters from the boats to people’s plates.

According to a 2016 economic study by Colby College, the Maine wholesale lobster supply chain employs over 5,500 workers and contributes $967 million to the state’s economy.

Lobster is often sold live and consumed primarily in restaurants. This puts pressure on the supply chain businesses to move that product through the market quickly.

“It’s more the freezers, the shippers, the logistics, the people dealing with trade that have had a much harder time rather than the harvesters,” said Kristin Vekasi, associate professor of political science at the University of Maine.

Wholesalers lost the export markets in Asia and Europe at the beginning of the year, for example, Vekasi said.

Annie Tselikis, executive director of the Maine Lobster Dealers’ Association, said the other businesses in the supply chain aren’t ever going to tell harvesters not to go fishing, even in a pandemic.

When commercial air travel was mostly grounded earlier this year, it left lobster dealers and exporters wondering what to do with millions of pounds of lobster.

“If you’re on a flight leaving Boston and you’re going to Paris, Dubai, or Shanghai, there are live lobsters in the belly of the plane,” Tselikis said.

Then came the shutdowns in the U.S., forcing supply chain businesses to pivot quickly.

Demand from the food service sector, including hotels, restaurants, caterers cruise ships, and casinos came to a screeching halt. But consumers, facing meat shortages and boredom, began to try new things in the kitchen, shifting the demand to supermarkets, Tselikis said.

“People were doing things like picking up lobster and going home and figuring out how to prepare it themselves or getting lobster roll meal kits through e-commerce,” said Tselikis.

And lobster dealers got a break in August when the U.S. and European Union agreed to lift tariffs that included an 8% tax on live lobster and 16% to 20% on so-called value-added lobster, like frozen tails and canned lobster, sent across the Atlantic.