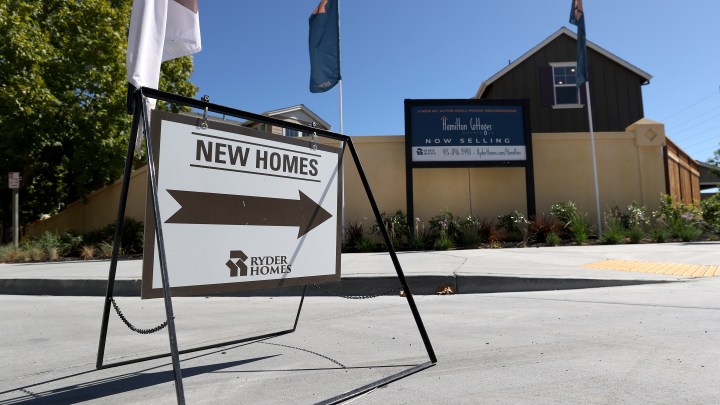 COPY
Sales of new single-family homes rose 4.8% in August and surpassed an annual rate of 1 million for the first time in 14 years. Justin Sullivan/Getty Images
COVID-19

Sales of new single-family homes rose 4.8% in August and surpassed an annual rate of 1 million for the first time in 14 years. Justin Sullivan/Getty Images
Listen Now

With nearly 900,000 people signing up for unemployment benefits after fresh layoffs each week for the last three weeks, who’s buying houses?

There’s news that new home sales in August hit their highest level since before the Great Recession.

Hale spoke with “Marketplace Morning Report” host David Branaccio about this, and the following is an edited transcript of their conversation.

Danielle Hale: With all the extra time at home, we do see a consistent trend toward people looking for more space. And that is usually easier to find as you get out to the suburbs. You’ll have extra space for maybe an office or a potential extra space for students to learn from home. The suburbs are definitely high up on the list because of that affordability factor.

David Brancaccio: You know, it’s just bizarre, though, right? We’re in a pandemic. I guess this fits into the picture of not a V- or U-shaped economic recovery. But what some are calling, I don’t know, a K-shaped recovery — one leg down for people who were laid off and this other leg up for people who kept their jobs who are profiting from assets like the stock market, and being able to get into a house.

Hale: Yeah, I think that’s a good observation. I think it’s worth pointing out, too, that new home sales broke the 1 million mark for the first time in 14 years. But this was also one-month activity. So some of what we’re seeing is make-up for a spring in which not very many home sales happened because people were stuck at home and not getting out and doing the things that normally happen in a really active, normal housing market in the spring.