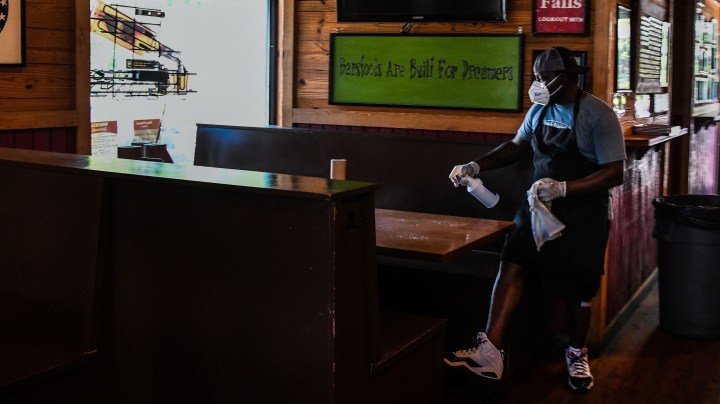 COPY
An employee wipes down a table at a BBQ restaurant in Atlanta, Georgia. Chandan Khanna/AFP via Getty Images
My Economy

An employee wipes down a table at a BBQ restaurant in Atlanta, Georgia. Chandan Khanna/AFP via Getty Images
Listen Now

Tess Thomas, the owner of Emma’s BBQ in Seattle, Washington, has been in the restaurant industry for years. She named the restaurant after her mother, Emma, who, according to Thomas, was a natural cook.

“Emma was just a person that anything she could smell, she could put her twist to it and it became something delectable,” Thomas said. “Her recipes go back to the days of slavery. I’ve tweaked them just a little bit, but I have a love of these recipes.”

Thomas always dreamed of opening up a restaurant with her mother’s recipes, and so her niece helped her find an available location in her neighborhood. Her nephews also pitched in, as she prepared to open the restaurant.

“[It’s] something in the community that young people, African Americans specifically and people of color, can look at and say, ‘They’re doing that. I have a chance to do that too,'” Thomas said. “To that end, I just want it to continue.”

“I try to get my granddaughters and all of the family involved in one way or another,” she added. “If I need help, they come to help, and it’s been a family affair.”

Click the audio player above to hear the full story. Let us know what’s going on in your economy using the form below, and your story may be featured on a future edition of “My Economy.”