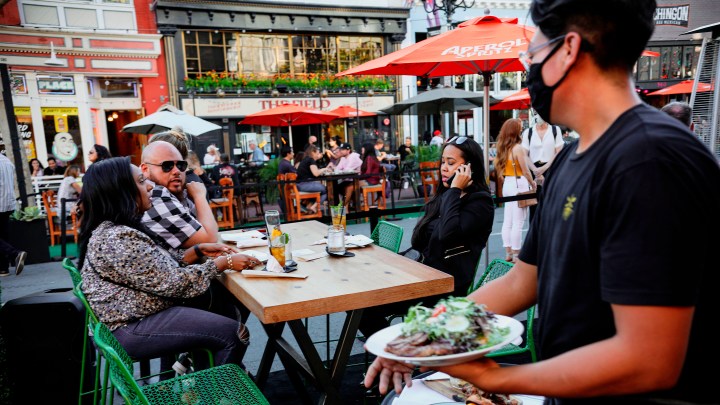 Retail sales rose 0.6% last month, the Commerce Department says. That’s less than the previous month. Things are slowing down, and it’s another sign the economic bounceback is itself slowing down.

If you don’t have more money, you’re probably not going to spend more money.

“This all reflects the fact [that] at the end of July, the supplemental unemployment benefits were ended — the extra $600 people were getting,” said Tendayi Kapfidze, chief economist at LendingTree.

Less pandemic relief money in unemployed people’s pockets slowed down spending growth. Still, from afar, the retail segment as a whole has made a pretty strong recovery.

“Sales as of August are higher than they were heading into the pandemic in February,” said James Bohnaker, associate director with IHS Markit.

But if you look into the details, it’s chaos and carnage. Online sales are up 22% year-over-year, restaurant sales are still down 15%. Building materials up 15%, clothing’s still down 20%.

One thing that’s going on here is Americans trapped at home have moved some of their spending around.

“There is a switch from services consumption, which makes up the bulk of our consumption to goods consumption,” said Constance Hunter, chief economist at KPMG.

“It’s one of the reasons we’ve seen manufacturing rebound more than we would have normally expected in a normal recession,” Hunter said.

But as time goes on, we’re going to start going back to the dentist, and we won’t need another bike.

“It’s one of the reasons we think we’ll see a bit of a plateau in retail sales as we go into the fourth quarter, as the economy continues to open and we see people begin to purchase those services again,” Hunter said.

People will buy services at the expense of goods. One sign we’re headed there is actually buried in the restaurant data — restaurant sales growth accelerated in August. It may be a sign that people are getting more and more comfortable going out, at least for now.