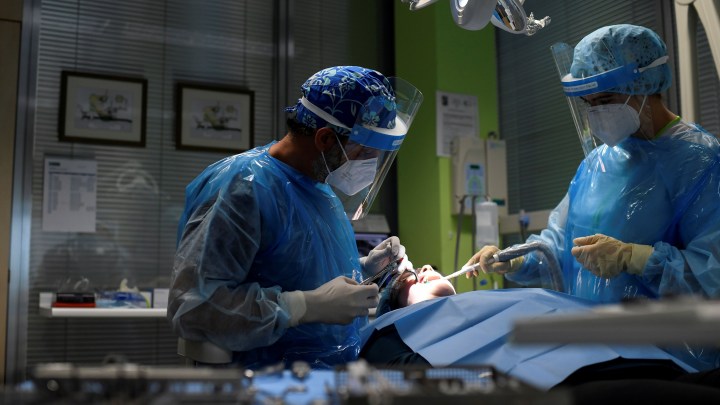 A few months ago Washington, D.C., periodontist Sally Cram was just getting used to being back in practice full-time. Cram had spent around $20,000 outfitting her office for the pandemic: air purifiers, sneeze guards, a washer and dryer for scrubs. Since then, she says the cost of personal protective equipment — masks, gloves, gowns — has gone up.

“Prior to all the COVID things, I wore those [gowns] anyway when I was doing periodontal surgery, and those disposable gowns were probably less than a dollar,” Cram said. “Now I’ve seen them advertised on some websites and different places for $5 and $10 apiece.”

Several of the dentists I spoke to mentioned that PPE costs have spiked. But supply has caught up to demand, and commercial laundry services have ramped up.

Because of the way Cram’s appointments are staggered, Cram’s patient load is at 70% of what it was before the pandemic. That’s just below the national average of 80%, which is where Colorado Springs pediatric dentist Jeff Kahl’s practice is.

“It’s not perfect by any means, but certainly much better than it was,” he said.

But business is booming for some dentists including Kirk Norbo in Purcellville, Virginia. Since he reopened his practice in early May, he’s hired two new assistants because so many patients are coming in.

“I know August numbers were ahead of where we were last year at this time, which says a lot,” he said.

But even though patients are lining up to come in, Atlanta-area periodontist Peter Shatz said they’re way more worried about their finances than they were before the pandemic. He increasingly has to offer patients lower-cost alternatives to treatments like implants because they’re out of work, their insurance has changed and they’re paying out-of-pocket.