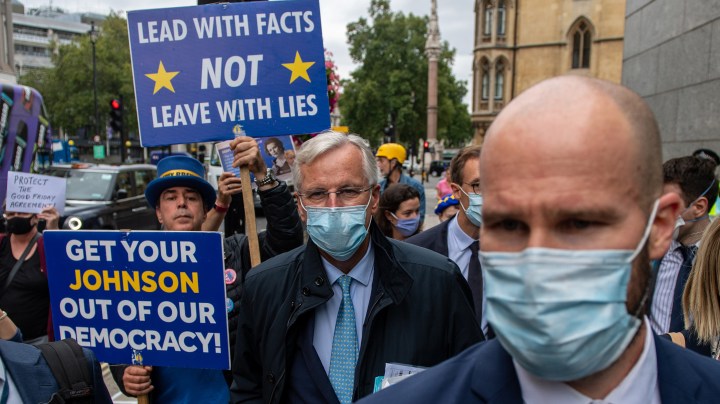 A furious row has erupted between the United Kingdom and the European Union over their future trade relations.

Both sides have till the end of the year to forge a new trade agreement. And, like many things in 2020, those negotiations have not been going well.

The British have caused outrage in Europe and Washington by trying to unilaterally change part of the agreement that led to Brexit in the first place — namely that which concerns Northern Ireland.

Billions of dollars worth of British trade with the EU — and potentially with the U.S. — are at stake.

Brexit is a two-stage affair. The first stage last year was the exit deal, under which if no trade agreement was reached with the EU, a hard border would be imposed between Northern Ireland and the rest of the U.K. This was meant to avoid a hard border with the Irish Republic, which remains part of the EU. Many Britons were unhappy with it, but the deal was agreed upon and turned into a treaty.

Under the second stage, Britain has had a transition period of a year in which to negotiate a new trade deal with the bloc. That period is drawing to a close. The negotiations have not gone well, and the British government this week has tried to change its commitment on Northern Ireland. In Parliament, the Northern Ireland Secretary Brandon Lewis made a startling admission.

“This does break international law in a very specific and limited way,” he said.

Yes, that was a British cabinet minister admitting that his government is planning to break the law, provoking outrage in both houses of Parliament. Former Justice Secretary Lord Charlie Falconer did not mince his words.

“This stinking hypocrisy chokes our country’s reputation and destroys our government’s ability to lead at home and make agreements abroad,” Falconer said.

And with the EU threatening to sue, the agreement that now looks in deadly peril is that free trade deal the U.K. is negotiating with the EU, its largest trading partner. Fiona Cincotta, market analyst at Forex trading firm City Index, said it’s not surprising the pound has fallen sharply.

At end of this year without a new deal, 43% of U.K. exports could face European tariffs and other barriers. Charles Grant, director at the Centre for European Reform, said it’s not a pretty picture.

“The huge prospect of chaos at the borders, [the] lack of ability to travel easily from one part of Europe to another, the impact on financial markets that will react very negatively,” Grant said.

The EU is demanding that Britons stop trying to renege on the exit deal. And it has a powerful ally — Washington, which brokered the peace deal in Northern Ireland in the 1990s. Nancy Pelosi, speaker of the House of Representatives, said if the British continue on this course, they can kiss goodbye any hope of a trade deal with the U.S. as well.