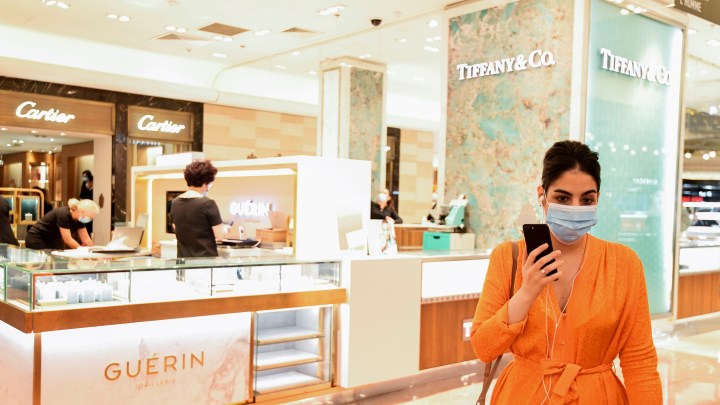 COPY
A customer wearing a face mask walks past shops of luxury brands Tiffany's and Guerin at a mall in Paris. Luxury goods sales are down during the pandemic. Alain Jocard/AFP via Getty Images

A customer wearing a face mask walks past shops of luxury brands Tiffany's and Guerin at a mall in Paris. Luxury goods sales are down during the pandemic. Alain Jocard/AFP via Getty Images
Listen Now

What was to be one of the biggest acquisitions in the luxury industry is now no more. LVMH, which owns brands like Louis Vuitton, Marc Jacobs and Fendi — is backing out on a $16.2 billion deal it signed with jewelry brand Tiffany & Co. about a year ago.

LVMH said it’s because of U.S. tariffs on French goods, and Tiffany is suing the luxury group. But the effect the pandemic has been having on luxury goods may have helped the deal lose its luster.

Visiting the Tiffany’s flagship store on Fifth Avenue in New York can feel like going to a museum. Except everything is for sale and comes with a glass of champagne.

“A lot of consumers go to the store because they want that experience,” said Alexis DeSalva, senior research analyst at Mintel. “But also because a lot of luxury retailers don’t make it that easy to shop online.”

DeSalva said just 50% of luxury consumers have shopped online, compared to 80% of traditional retail. Part of that is because it’s harder for shoppers to justify dropping thousands of dollars without ever touching a product.

And during the pandemic, the in-store shopping experience has suffered. Tiffany’s revenues were down nearly 30% in the last quarter. And many luxury shoppers are tourists — tourism is another industry that’s been hurt by COVID-19.

“People will brag about where they bought their luxury goods,” said Joseph Nunes, a marketing professor at the University of Southern California. “They like to buy souvenirs that remind them of vacations or events.”

“People are probably not heading to Tiffany’s for an engagement ring or an anniversary present,” DeSalva said.

COVID-19 aside, LVMH said in a statement that the French government wanted it to delay the deal because the United States is threatening to impose taxes on French products.

“Part of it sounds like a strategy to wait out what’s gonna happen with the tariffs,” Nunes said, adding LVMH might try to come through later with another deal, likely at a lower price. 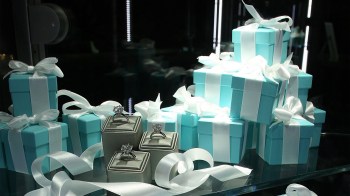