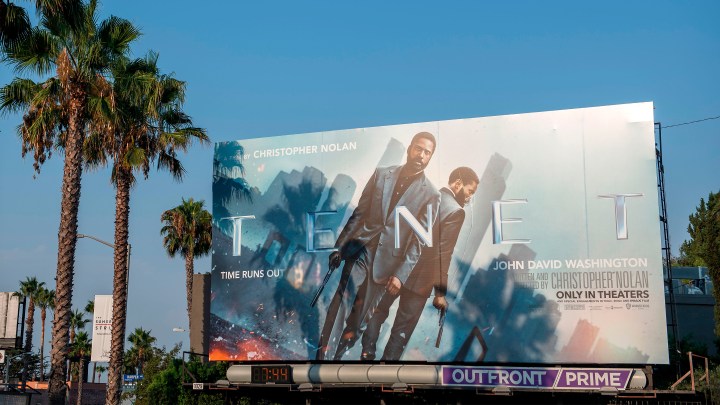 The sci-fi thriller movie release, “Tenet” has so far taken in a decent $146 million at the box office worldwide. That’s including this weekend’s U.S. and Canada premier, which raked in $20.2 million. On any given day that’s chump change, but with a pandemic still raging, experts say “Tenet” did OK.

Arun Sharma, professor of marketing at the University of Miami, said there are two lessons from the last couple of months in movie premieres. First: some movies are just better off premiering on streaming only. “If it’s a children’s movie, the data is very clear: launching it is a good idea,” Sharma said. Which is why Disney Plus just released it’s live-action “Mulan” on it’s platform for $30.

But Sharma said there’s not a lot of data on how movies for grownups do with a streaming premiere.

Which leads to lesson number two: if it’s not a kids film, push the release date back. Because while “Tenet” did fine, most movies aren’t going to be these star-studded, highly anticipated juggernauts, led by acclaimed directors. And plenty of films that are all that and then some, have still been pushed back, from “Wonder Woman 1984” to “Top Gun: Maverick.” (That’s right, Top Gun fans, you waited over 30 years for a sequel, you can wait one more, until 2021.)

Frank Patterson, president of Pinewood Atlanta Studios, where Marvel movies are filmed, is cautiously optimistic. Right now production is only resumed at around 30% capacity at his studios. But he says the industry constantly weathers challenges. Actors drop out. Deals die. “Our pivot skills are legendary in the movie business.”

There’s optimism out there. “Tenet” cost $200 million to make, and has so far grossed close to $150 million worldwide — almost breaking even.

And these days in Hollywood, that’s a good look for opening weekend.