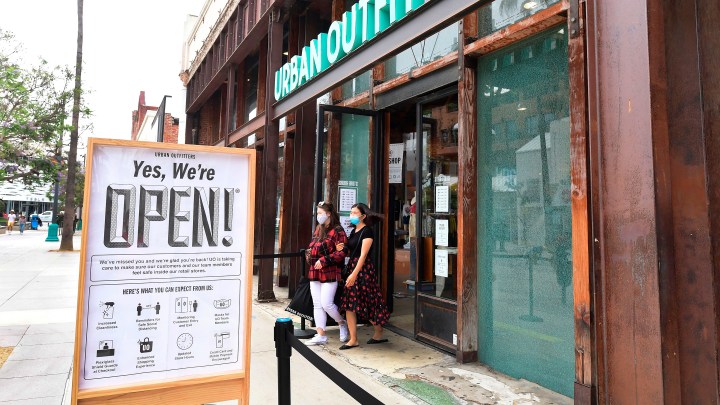 COPY
A reopened Urban Outfitters store in Santa Monica, California. Heading into fall, retailers are being cautious about having too much inventory. Frederic J. Brown/AFP via Getty Images
COVID-19

A reopened Urban Outfitters store in Santa Monica, California. Heading into fall, retailers are being cautious about having too much inventory. Frederic J. Brown/AFP via Getty Images
Listen Now

If you read through recent transcripts of earnings calls from retailers, you’ll notice one word coming up a lot: “conservative.” Conservative in the business, not political, sense.

“We’re going to be conservative on inventory.” — Abercrombie & Fitch executive

“We will continue to plan our businesses conservatively.” — Urban Outfitters executive

Going into the fall and the holidays, retailers are being cautious about what they buy.

They’re trying to avoid a repeat of this spring. When the pandemic hit, sales plummeted, and retailers had a ton of inventory left over that they paid for but couldn’t sell. They had to offer steep discounts to get rid of it.

Craig Rowley, a senior client partner at consulting firm Korn Ferry, says when you do that, “you can lose all the profits you’ve gained through the whole season.”

This time around, with all the uncertainty, retailers are just buying a lot less. Sonia Lapinsky, managing director at AlixPartners, said it is a risky bet because if retailers are wrong, they could miss out on potential sales.

“This is their peak selling season, and given such a year of turmoil that we’ve had, it’s really risky for them to run out of stock and just miss that top line,” Lapinsky said.

Lapinsky said some shoppers will likely be disappointed this year —  and find something that they want is sold out. There’s no historical precedent here: Retailers can’t just look back at last year’s sales and know how many winter coats or patio heaters or sleds to order. We’re in a new reality. So they’ve been making a lot of guesses.