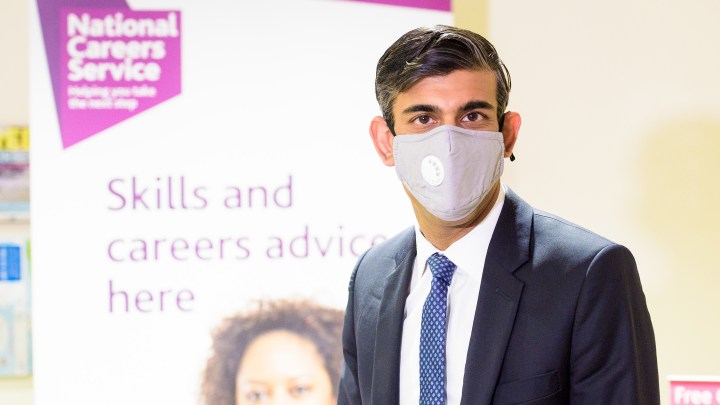 COPY
The goal is to create around 300,000 jobs and help train these entry-level workers. Pictured: U.K. Chancellor of the Exchequer Rishi Sunak at a Jobcentre Plus in London. Anthony Upton-WPA Pool/Getty Images
COVID & Unemployment

The goal is to create around 300,000 jobs and help train these entry-level workers. Pictured: U.K. Chancellor of the Exchequer Rishi Sunak at a Jobcentre Plus in London. Anthony Upton-WPA Pool/Getty Images
Listen Now

The job market is terrible for adults with résumés. Imagine being a young person just starting out.

Here’s an idea: The government pays businesses cash if they hire young people. That’s just what the British government is doing. This week it launched a $2.5 billion “Kickstart” program.

The BBC’s Victoria Craig, who hosts the global edition of the “Marketplace Morning Report” from London, has more on this. She spoke with host David Brancaccio and the following is an edited transcript of their conversation.

David Brancaccio: So money changes hands in this new program. How does this Kickstart thing work?

Victoria Craig: It gives businesses about $2,000 for every six-month work placement they provide for people aged 16 to 24 who are on an unemployment benefit here known as Universal Credit. Now job centers are going to be the ones responsible for identifying people at risk of long-term unemployment and referring them to the scheme. Ultimately, the goal is to create around 300,000 jobs and help train these entry-level workers.

Many big businesses have already signed up. Dale Vince is the owner of one of those companies. It’s in green energy company called Ecotricity. He told the BBC his business could likely create several dozen jobs. But he worries about the implementation.

Dale Vince: We reached out to our local Job Center to say, look, how’s this going to work? And they said, actually, they didn’t know, they weren’t in the loop. We’ve not heard back. So it seems like the details of the policy have not been communicated to local job centers.

Brancaccio: And the U.K. has tried a version of this before, right? What’s the track record in getting young people working?

Craig: Yeah, so in the aftermath of the 2008 financial crisis, the U.K. launched a program called the Future Jobs Fund. And the biggest problem for young people is that the longer they’re unemployed, the worse their longer-term pay prospects are. And that can cause a drag on society in the country’s economic prospects overall. So academic research shows, and the think tanks that we spoke to say, that these types of programs do help combat this problem.

Critically, with this scheme that the government has launched this week, for businesses to be able to get the funding they have to prove that they’re actually creating jobs and not just laying off older workers to make way for newer younger ones. The question though, is going to be whether this program goes far enough. Thousands of young workers work in hospitality and retail and they’ve been furloughed, so they’re the ones at risk of permanent unemployment because of the coronavirus pandemic.