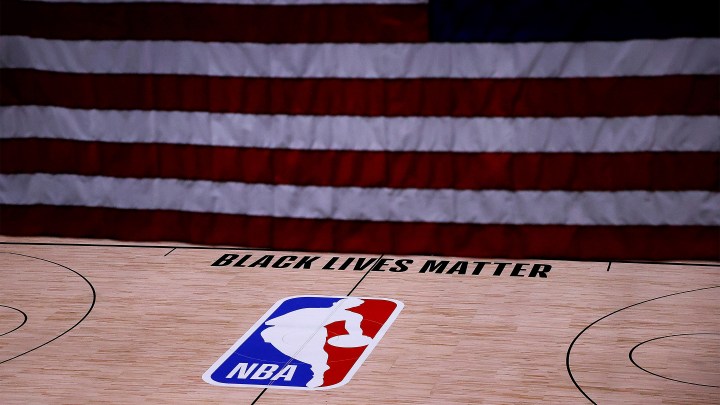 COPY
The Black Lives Matter logo on an NBA court. Many prominent athletes have committed themselves to social activism. Kevin C. Cox/Getty Images
Race and Economy

Professional athletes across U.S. sports leagues have in recent days decided not to compete after the police shooting of Jacob Blake. Players have been using their visibility to agitate for social change for decades. How have their actions affected their value as athletes — for better or for worse?

Olympians John Carlos and Tommie Smith raised their fists at the ’68 Games. Cassius Clay converted to Islam and changed his name to Muhammad Ali, then protested the Vietnam War. Charles Ross, director of the African American Studies Program at the University of Mississippi, said those pioneering activists changed the mindset of Black athletes.

“Listen, we are athletes, but we can still address political issues,” he said.

But their activism cost them. Ross said Carlos and Smith had a hard time making ends meet. Ali lost his boxing license for three years.

“You have a number of individuals who begin to really speak out, using their athletic platform,” Ross said.

“It’s opened doors for more sponsorship and media,” she said.

Some sponsors have embraced activist athletes. Nike built an entire ad campaign around quarterback Colin Kaepernick after he took a knee for Black Lives Matter.

Stephen Ross, associate professor of sport management at Concordia University, said that came with a cost, too.

“It doesn’t seem like it’s helped him in terms of securing a position on a team,” he said.

He said athletes who want to be effective activists need to keep their eyes on the prize if sponsorship money rolls in.

“Find a way to, lack of a better phrase, keep it genuine, and to not desert the path that they’re on to bring about societal change,” he said.

Shropshire said right now companies are looking for new ways to engage with customers. And athlete activism might be just what they’re looking for.