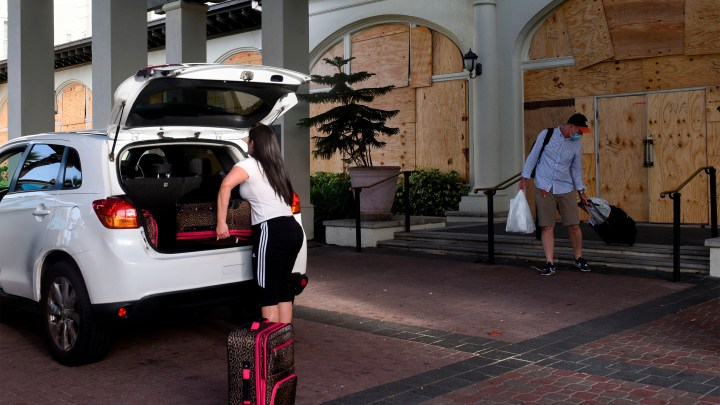 COPY
A couple leave the hotel in Galveston, Texas, where they had taken shelter from Hurricane Laura on Thursday. Ellie Cherryhomes/AFP via Getty Images
COVID-19

A couple leave the hotel in Galveston, Texas, where they had taken shelter from Hurricane Laura on Thursday. Ellie Cherryhomes/AFP via Getty Images
Listen Now

The COVID-19 pandemic has complicated emergency response efforts for those who had to evacuate to escape Hurricane Laura in Texas and Louisiana. The need for social distancing means emergency officials had to find alternatives to big, crowded evacuation centers.

What’s the best place for emergency officials to put thousands of evacuees when they arrive in a city seeking temporary shelter from a hurricane during a pandemic? Bryce Bencivengo is the spokesman for the Austin, Texas, emergency management office.

“With kind of our options being limited, we are using this time hotel rooms,” he said.

The city has paid to put 3,000 people in 21 hotels in the area, Bencivengo said. The state of Louisiana booked 1,700 rooms for evacuees.

Last week, the ailing hotel sector in Texas was at less than 50% capacity due to the pandemic. Now in cities like Austin and San Antonio, it’s at nearly 100%, according to Justin Bragiel, general counsel with the Texas Hotel & Lodging Association.

“It’s not the kind of business we’re hoping for, but there can be economic activity that results from it,” he said.

Bragiel said the state is paying the hotel bills and then will seek reimbursement from the federal government.