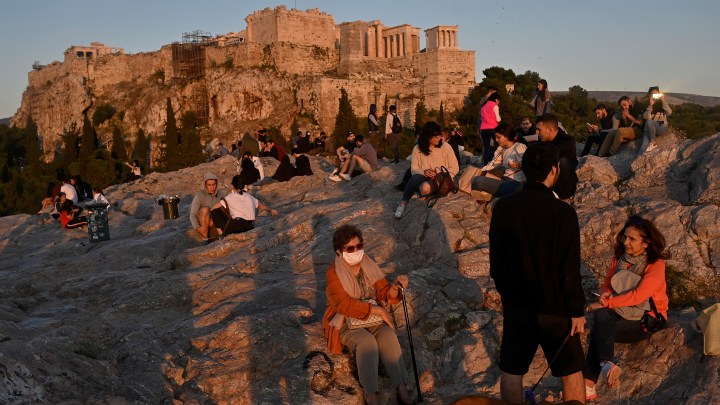 COPY
People enjoy a sunset on the Areopagus hill overlooking the ancient Acropolis in Athens in May. Louisa Gouliamaki/AFP via Getty Images

People enjoy a sunset on the Areopagus hill overlooking the ancient Acropolis in Athens in May. Louisa Gouliamaki/AFP via Getty Images
Listen Now

Greece’s international reputation took a battering during the European debt crisis that dominated the first half of the last decade. The country was widely perceived as irresponsible, corrupt and inefficient; in fact,  something of a basket case.

But the latest crisis to hit Europe and the world, COVID-19, has cast the Mediterranean country in a rather different light. Although Greece, along with most of its European partners, has seen a recent sharp increase in the number of infections, it has battled the pandemic far more effectively than much of the rest of the European Union. With fewer than 10,000 cases and 254 deaths (at the time of writing) in a population of 11 million, Greece’s overall performance in curbing the spread of the disease has been impressive.

To find out the reasons for this relative success, and whether it might improve the country’s economic fortunes, Marketplace has revisited some of the Greek citizens that we met during the debt crisis.

“I think we enjoyed the lockdown”

Among them, none had been more scathing a critic of the Greek national character than actor and writer Yannis Sarakatsanis. At the height of his country’s financial woes, he co-produced a satirical stage show in Athens that ridiculed what it depicted as Greek fecklessness and indiscipline, a penchant for dodging taxes and a refusal to face up to the fiscal consequences.

And yet today even the acerbic Mr. Sarakatsanis seems to have softened his view. In its handling of the pandemic, he said, Greece’s self-esteem has been somewhat restored.

“It is true that we felt proud,” he said. “We felt competent as a country for once in our lives, and this whole thing boosted our confidence.”

However, the satirical Sarakatsanis cannot resist a dig at his fellow countrymen and women.

“I think we enjoyed the lockdown because we didn’t go to work,” he said. “Because we got to rest, spend time with family and friends, watch movies and stuff like that.”

But he cannot gainsay Greece’s comparatively better performance in coronavirus management than many of its European partners, including its arch critic in financial matters, Germany. Athens has been proportionately five times more effective in limiting the mortality rates than Berlin, according to Johns Hopkins University data. Why? The answer is simple, according to another of the characters we met during the debt crisis, Christos Mavrou, a department store sales manager.

“The Greek government took measures very early compared with other countries,” he said. Carnivals and other large gatherings were banned as early as February before a single Greek death from the virus, and, Mavrou said, the citizens eagerly complied with the lockdown and other restrictions because they found the government warnings that the health care system might not cope all too credible.

“They knew that the health system is very weak in Greece,” he said. “They knew they would have a hard time if they had to go to the hospital.”

Greece’s public health care system has been ravaged by years of austerity mandated under the International Monetary Fund and the European Union bailout conditions.

Another reason for the citizens’ compliance with the government’s measures, Mavrou said, was the very strict enforcement.

“You know Greek people are very poor,” he said. “And they don’t want to pay the fines!”

With the second-oldest population in Europe after Italy, Greece could have so easily become a COVID-19 disaster zone. Another reason that it hasn’t so far is cultural, said Athens-based psychiatrist Dimitris Papadimitriadis.

“You see, Greece is still a country where the family counts a lot. Many generations stay under the same roof, so the youth are very protective of the elderly,” he said. “They don’t want to endanger their grandparents.”

But Papadimitriadis, a public health expert, is worried that Greece may have been resting on its laurels, has let its guard against the virus slip a little, and this may explain the upsurge in infections in August.

“I think we’ve been a bit laid back after the initial success. We allowed tourists to come into the country without too much testing, just random tests, and this has helped create the second spike,” he said.

Few Greeks, however, will argue that tourists should have been kept out of Greece altogether.

“We depend on tourism,” insisted bank worker Efi Panoutsakapoulou. “We had to open the borders. It may have destroyed what we’ve achieved, but we cannot do without tourism. We live from tourism.”

Tourism accounts for almost 20% of Greece’s gross domestic product and it also supplies a big chunk of the Panoutsakapoulou family’s income: Efi’s  husband, Evan, is a leisure yacht skipper. Thanks to the pandemic, his employment has been very patchy this year, and that has already left a big hole in their household budget. But Efi is not complaining. Today she feels nothing like the shame and stress that she felt during the debt crisis, when Greece was a pariah in Europe.

“Now I know everybody has the same problem, it’s not stressful for me.  We’re all in the same, the same boat,” she said.

For the first time in a decade, Panoutsakapoulou said she feels optimistic about Greece’s  future.

And so does book publisher Costas Papadopoulos.

When Marketplace first interviewed the boss of Dioptra Publishing in 2015 — when the economy teetered on the brink of total collapse — Papadopoulos was almost despairing, bewildered and humiliated by the chaos into which his country was descending at that time.

His mood is very different today.

“We can look at ourselves in the mirror now. Before, we couldn’t,” he said.

While he accepts that tough times could be on the way this fall and winter, he’s more confident than ever that Greece will pull through. He was heartened that the center right government — in power for a year now — took such decisive action at the start of the pandemic, and his faith in Greece and its institutions has been restored.

“I think we trust the state a lot more than we used to trust it before. And I hope we’re not going to be very disappointed in the near future. But I do have faith in Greece. There is a lot of potential here. I’m feeling optimistic, yes,” he said.

That optimism could be sorely tested in the months ahead. The IMF has forecast that the Greek economy will shrink by 10% this year, a bigger annual drop than any seen during the debt crisis.