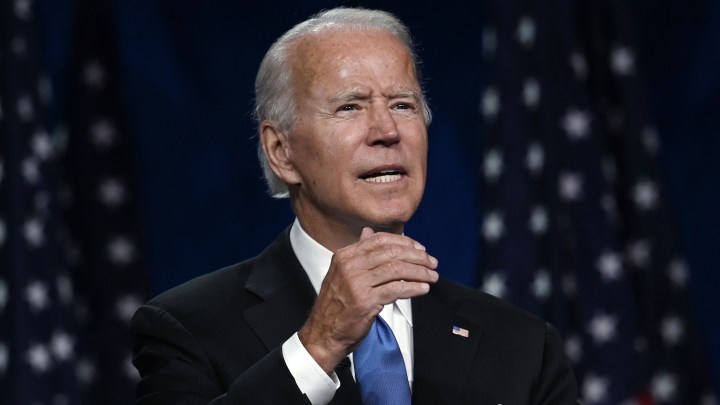 Joe Biden is now officially the Democratic party’s candidate for president. He spoke Thursday night about unifying the country, moving it from what he sees as darkness into light. Biden also outlined his desire to rethink how the country funds its economic recovery, by ending tax loopholes and getting the wealthiest corporations and individuals to “pay their fair share.”

How will this go down among those who’d be asked to pay more? Ian Bremmer, president of the political risk consultancy Eurasia Group, joined “Marketplace Morning Report” host David Brancaccio to discuss. The following is an edited transcript of their conversation.

David Brancaccio: Does this Democrat now have America’s business community running scared with all that talk about no more tax cuts and criticizing the last tax cut as a giveaway to the 1%?

Ian Bremmer: I wouldn’t say that he has the private sector running scared. I think everybody out there understands, given the nature of this crisis, that taxes are going up, that the tax cuts under the Trump administration are going to be undone, and that you need to find a way to pay for all of this stuff. I don’t think that that is such a huge problem. I can’t tell you how many people, David, I’ve spoken to — once Kamala was made VP, I mean, if it had been Elizabeth Warren or someone more progressive that was going to go after them directly — you know, the ‘break up the tech firms,’ the ‘no fracking,’ the going after the banks, all of that. I think that that then you would see them saying, “No way, I’m not doing this, under no condition. Maybe I won’t vote. Maybe I’ll vote for Trump.”

But, you know, I think that most people I know in the private sector find Biden and Harris — if they’re not Democrats — find them unobjectionable, right? They can deal with that. It’s sort of like Peter Thiel, who was, you know, the big Trump supporter from Silicon Valley in the first administration, and even left [Silicon] Valley because he couldn’t stand the culture there and the groupthink. And he’s basically sitting this one out. I think you’ll find a lot of that from Wall Street and industry right now.

Brancaccio: And also, response to the pandemic is a special case this time. It means we’re not living in that normal paradigm where, pro-business, anti-business. It’s like maybe a different approach to the coronavirus could ultimately help the economy?

Bremmer: This election is going to be much more about the largest crisis that any of us have experienced of our lifetimes. And it’s not Trump’s fault that we’re having that crisis. Coronavirus did not happen because of him. But you know, you have to see your judgment of how this government, and particularly, this president has taken responsibility and has responded economically, health care, to this crisis. That’s going to determine a lot of who decides to vote and who decides who they’re going to vote for and, whether you think Biden would be more more effective for that.