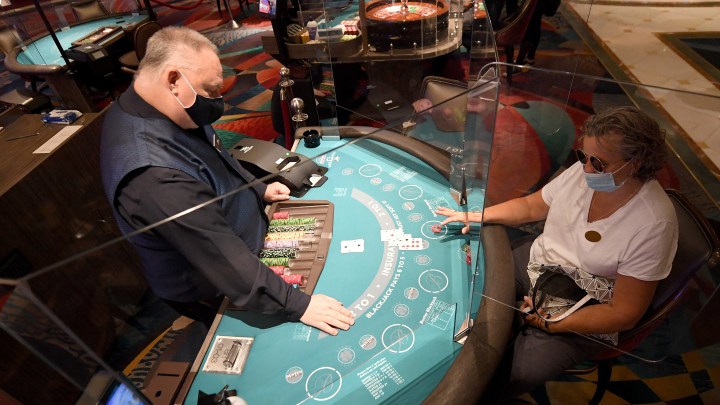 COPY
A dealer at work at a casino in Las Vegas in June. Jobs have fallen dramatically in tourism and hospitality. Ethan Miller/Getty Images
COVID & Unemployment

A dealer at work at a casino in Las Vegas in June. Jobs have fallen dramatically in tourism and hospitality. Ethan Miller/Getty Images
Listen Now

Jobless claims came out today, and they are back up above 1 million for the week ending Aug. 15, after falling to a (revised) 971,000 the week before. This may be further evidence that the economic recovery is slowing or stalling. One related piece of data that doesn’t exactly bode well for that recovery: job listings are down by about 20% compared to this time last year, according to the jobs site Indeed.com.

They were down by even more in April and May but now the rebound that had started has basically come to a halt. That “suggests the possibility of a quick V-shaped recovery for the labor market continues to diminish,” said Nick Bunker, economic research director at Indeed. And “that it’s increasingly looking like we’re in for a long haul when it comes to this recovery.”

Job postings have fallen dramatically in industries that you’d expect, like hospitality and tourism, but also in banking and finance and software development.

“We’re at a stage now where we’re seeing a pretty broad hit to postings,” Bunker said. “It’s not just in those sectors of the economy that are directly affected by the coronavirus.”

The numbers give us a sense of how a lot of employers are thinking right now.

And the numbers tell us what to expect from future unemployment numbers. Because it’s hard to find a job when you can’t find a company that’s hiring.

When watching for the recovery, continuing jobless claims are key