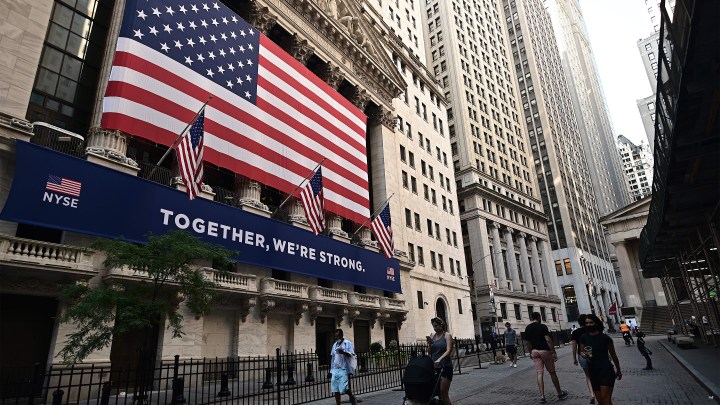 On Aug. 19, 2019, the Business Roundtable, a group of CEOs from some of the country’s biggest companies, announced a new Statement on the Purpose of a Corporation.

Nearly 200 CEOs pledged that moving forward, they would “lead their companies for the benefit of all stakeholders — customers, employees, suppliers, communities and shareholders.”

But the economy has changed since 2019. Have these companies held up their commitment in the middle of a pandemic and a recession?

Tyler Wry, an associate professor of management at The Wharton School at the University of Pennsylvania, has been tracking the signatories’ actions since the pledge. He spoke with host Kai Ryssdal. Below is an edited transcript of their conversation.

Tyler Wry: I found that, in general, the signatories to the Business Roundtable statement did no better than any other companies in the S&P 500 when the pandemic hit. And if you dig a little bit deeper, the companies that were returning the most money to shareholders before signing the BRT statement, they had by far the worst responses to the pandemic out of any companies in the S&P 500.

Kai Ryssdal: So break that down a little bit, especially that last bit about returning money to shareholders. Let’s explain what the Business Roundtable promise or pledge, I suppose, was designed to do.

Wry: Sure. So the Business Roundtable statement on the purpose redefining what a corporation is — what they were doing was trying to move away from pure, unadulterated shareholder capitalism, where the only purpose of the company was to make money for its shareholders. And so the statement said we need to prioritize all stakeholders, put them on equal footing with our shareholders and not just trying to return money to the people who own our stock through buybacks or dividends.

Ryssdal: And how did they do before the pandemic? I mean, were they living up to that?

Wry: I think that’s the most interesting thing that we found in our data. We found that the companies who signed the statement actually did start to change their behavior in ways that aligned with what was in the statement. So we saw them returning less capital to shareholders, less dividends — or lowering their dividends, less buybacks and taking steps to be more stakeholder-oriented. So between when they signed the statement and when the pandemic hit, it seemed like the statement was worth more than the paper it was printed on.

Ryssdal: All right, so this is an oversimplification, but when the pandemic hit, did they just go, “Hey, man, we got to survive. And sorry about that promise we made.”

Wry: You know, I think it’s a little bit more complicated than that. Because when you look at any firm in the S&P 500, they could have had that same response. The shock was felt equally across these companies, obviously different across industries. But when you look comparing BRT firms in the same industries, you see different responses. So I don’t think it was, you know, ‘Sorry, the statement is just out the window.’ You know, ‘This is something existential we have to deal with.’ I think there was something going on with this change that they were trying to make, and then when they encountered the shock, you know, it led to a different type of behavior.

Ryssdal: Well, and that behavior includes more layoffs and things that companies were doing, you know, back in March and April, when we all thought the world was ending, you know?

Wry: Yeah, that’s absolutely right. So layoffs, furloughs, a range of indicators — we saw these companies not doing as much as some of their S&P 500 peers.

Ryssdal: What do you suppose this conversation would be like on this anniversary, had the pandemic not happened? Would they still be making that progress that they were in the beginning?

Wry: You know, it’s tough to say. My guess is, based on how things are trending, that we’d be talking about, you know, some reasonable success in terms of, you know, shifting behavior in ways that lined up with the statement. Now, that said, if we just compare the signatories to this statement with a match sample of S&P 500 firms, they’re much more likely to behave badly just as a baseline before any of this happened anyway. So, their behavior was ticking in the right direction. But they still had a ways to go even to sort of get to neutral.